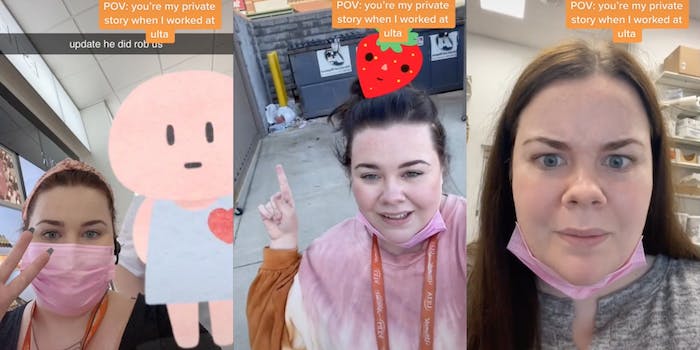 ‘Those who were on my private story were not surprised I quit’: TikToker exposes ‘toxic’ working environment at Ulta Beauty

'I worked at Ulta for two years and would never do it again.'

After quitting her job at Ulta Beauty, one TikToker continues to expose the company for its “toxic” work environment.

The former employee, known as Maddie (@maddiebwells), shared a video compilation of several incidents that occured while she worked at the chain, captioning the video, “let’s just say those who were on my private story were not surprised I quit LMAO.” She also tagged the video #toxic.

The TikTok’s on-screen caption read, “POV you’re my private story when I worked at Ulta.” The video garnered about 117,000 views on TikTok as of Sunday. Maddie has about 265,000 followers on the platform, where she shares retail stories and makeup reviews.

In the video, Maddie showed footage of the store being robbed, her scraped knee, an allergic reaction from some of the store’s merchandise, and the store’s rummaged-through trash dumpsters.

One picture in the video was a selfie Maddie took on Snapchat while crying at work, with the caption “I’m actually so done with this place I literally can’t stand it.”

Maddie’s viewers chimed in, sharing their own “toxic” experiences working at the beauty store.

“I worked at Ulta for two years and would never do it again. Severely underpay and overworked,” one viewer commented.

Another viewer said, “I worked at ulta and saw people steal constantly I just walked the other way I wasn’t getting payed enough to care.”

“Ulta mgmt was very bad about doing ANYTHING. Almost like they didn’t care,” another viewer wrote.

Ulta and TikTok user @maddiebwells did not immediately respond to the Daily Dot’s requests for comment via email.