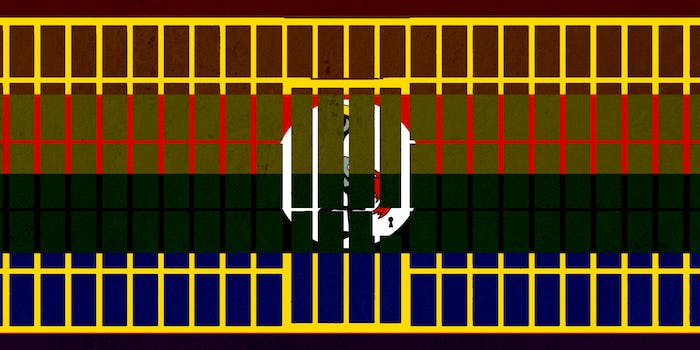 The internet made Uganda Pride possible—but that didn't stop arrests.

On Thursday, Uganda’s LGBT community gathered for the third night of its weeklong pride festival. The drag contest and lip-syncing were typical of LGBT pride events here in the U.S.; the police raid and mass arrests were not.

In Uganda, it is illegal to have “carnal knowledge of any person against the order of nature,” meaning gay sex. That crime carries a punishment of life in prison, and similar laws send Ugandans to jail for “attempting” to engage in same-sex love or for things like holding hands and kissing in public. In 2009, the country’s parliament introduced the death penalty for homosexuality—but international protests and harsh U.S. State Department sanctions resulted in life imprisonment instead of death.

Despite the harshly homophobic views (in Uganda, 96 percent of residents surveyed by Pew Research Center said homosexuality is unacceptable), the LGBT community continues to speak out.

This year, #UgPride2016 was funded online: An All Out campaign raised $20,000 from 2,540 donors to foot the bill for a series of indoor events starting August 2. A drag ball and contest to crown “Mr/Miss/Mx Uganda” took place on Thursday night in Kampala.

Alicia Darling second run up for Miss pride Ug 2015-2016 is doing her thing "Drunk in love by Beyoncé @miz_cracker pic.twitter.com/V0J520q3io

Pride Uganda continues to be as amazing and inspiring as ever @Prideuganda2016 #lgbt #gaypride pic.twitter.com/cDupyjNKpe

But just hours into the opening night event, police raided the party and arrested around 16 people while detaining hundreds more. According to multiple tweets from those in attendance, police justified the arrests by claiming the LGBT pride party was “a gay wedding.”

My friend was the grand Marshall at @Prideuganda2016, here's his account of the police raids: pic.twitter.com/nEY2PM84nQ

We have been raided by police. And they are saying our gathering is un lawful @GeraldMusa3 @BBCBreaking @CNN @mygayprides @Gay_News_Now

Among those arrested was Frank Mugisha, an Ugandan LGBT rights activist who was nominated for a Nobel Peace Prize in 2014 for his advocacy work. Mugisha is the executive director of Sexual Minorities Uganda (SMUG); the organization’s founder David Kato was brutally murdered in 2011 after a local tabloid ran “100 pictures of homos” and encouraged readers to hunt and kill them.

Mugisha and the others were released from custody after a few hours, he said in a statement.

“Any force by Ugandan police targeting a peaceful and lawful assembly is outrageous,” said Mugisha. “The LGBTI community stands with all Ugandan civil society movements against police brutality.”

The statement—signed by SMUG and other LGBT rights organizations— described police locking the gates of the club, trapping “hundreds” of attendees inside while conducting the arrests. Police were said to have beaten, sexually assaulted, and humiliated people at the event, even taking photos of individual attendees and threatening to publish them.

According to the statement, one person panicked at the police abuse and jumped out of a sixth-floor window to avoid arrest. That person is said to be in critical condition at a local hospital.

In a tweet, U.S. Ambassador to Uganda Deborah Malac condemned the arrests and issued a message of support to the country’s LGBT community.

“I stand w/ @PrideUganda2016 to uphold basic rights of all individuals,” wrote Malac on Twitter. “No one should face discrimination because of who they are.”

On Friday, the week of Uganda Pride events continued with a contingent of LGBT advocates delivering medical supplies to a local hospital.