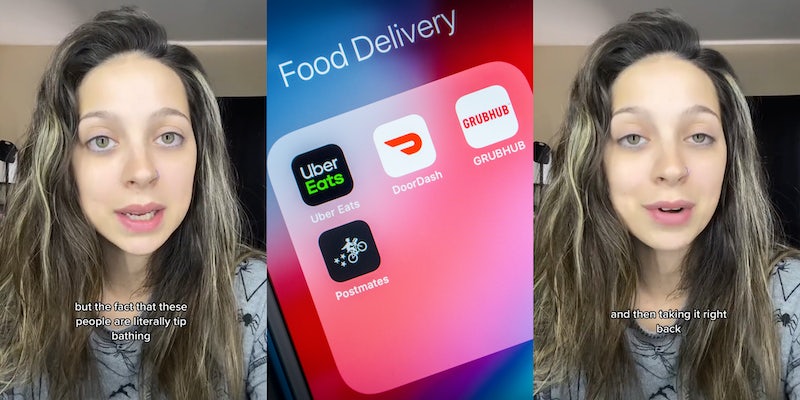 ‘I am so disgusted’: Uber Eats driver calls out customer who tip-baited her—making only $2 on an originally $15 order

'Once they tip that should be it, shouldn’t be able to take it back.'

The topic of “tip baiting” has gone viral on TikTok once again after one driver, who works for both Uber Eats and DoorDash, recently discovered firsthand what the term means.

The driver, a TikToker named Sarah (@thelifeof_sarah_), posted a 3-minute video sharing what happened in her first tip-baiting experience.

Tip-baiting occurs when customers add a large tip before getting their order in hopes of receiving it faster. Then, they remove or reduce the tip after the order has been delivered. The Daily Dot previously covered a video from TikTok user @owenlindstrom1, who said tip baiting is one of the worst things a delivery driver can encounter.

In her clip, Sarah says she is “disgusted” by the practice. She says she accepted an order for $15 that was in a 3- to 4-mile radius. She immediately hopped on the order and picked it up from the merchant. When she looked at the order notes, she saw that customer requested a “whole heaping handful of ketchup, two things of water, a bunch of sauces, and a bunch of napkins and straws.”

Sarah explains that anyone who works for Uber Eats, DoorDash, or other food delivery services likely knows that merchants can be “assholes.” Many restaurants don’t appreciate or allow people, even delivery drivers, to collect extra condiments without paying for them. But Sarah says she tried her luck anyway and asked the cashier if she could get any or all of the additional items.

The cashier told Sarah no, but the store manager had a different response. She says the manager flirted with her and eventually gave her the extra items.

When Sarah got to the customer’s house, she was outside waiting.

“I handed her her food piping hot, everything in the bag that she asked for, two whole things of waters, and she said ‘thank you,'” the TikToker says. “I said ‘you’re welcome. Everything’s in the bag. It’s all hot, everything’s good to go, and I appreciate you for the tip.’ She smiled and said ‘have a good day.'”

After leaving, Sarah waited about an hour to see what her earnings from the order were. She says delivery service apps give customers an hour to increase their tip. She didn’t realize that they can also reduce or remove their tip during that period. Instead of $15, Sarah says she made only $2 from the order, the basic pay she makes to take the order in the first place.

Convinced that something was wrong, Sarah went on social media to investigate and found that tip-baiting is a common occurrence. After messaging other delivery drivers, she realized she was tip-baited.

“So you mean to tell me I went the extra fucking mile for this customer like I do every other customer, and they do me like that?” Sarah says in the video. “I had to deal with a guy gawking about my eyes and my lips and how if I wasn’t married he would shoot his shot for that? Are you fucking kidding me?”

Sarah adds that she is always “nice” and “respectful” to customers and makes sure that they get their food hot. She always has a smile on her face and wishes every customer the best day, she says.

“But the fact that these people are literally tip-baiting to get their fucking way and then taking it right back—oh that’s ballsy,” the TikToker says. “You do know we know your address, right? That doesn’t occur to you? One day it’s going to the wrong person. Just saying.”

The video prompted a debate about tipping culture. Some commenters said Uber Eats and DoorDash customers shouldn’t be allowed to remove their tips.

“Once they tip that should be it, shouldn’t be able to take it back,” one user commented.

“I blame Uber for allowing customers to make those changes. They should have to prove that u provided bad service,” another viewer said.

Others said companies should pay their workers a living wage so that customers aren’t expected to tip.

“Unfortunately America has to [stop] this tip earning thing and should up the salaries or pays,” one user said.

Another user wrote, “I wish tips were removed completely and companies actually paid their workers a fair salary to begin with.”

“It’s cuz people are on here sayin they wont take an order if theres no or low tips so people found a way around it. Not right but thats gotta be it,” one user said.

The Daily Dot previously covered a TikToker known as The Gig Doctor, who posted a viral video about why it isn’t worth it for DoorDash drivers to take orders that are small or have no tips.

The Daily Dot reached out to the creator via TikTok comment and to Uber Eats and DoorDash via email.