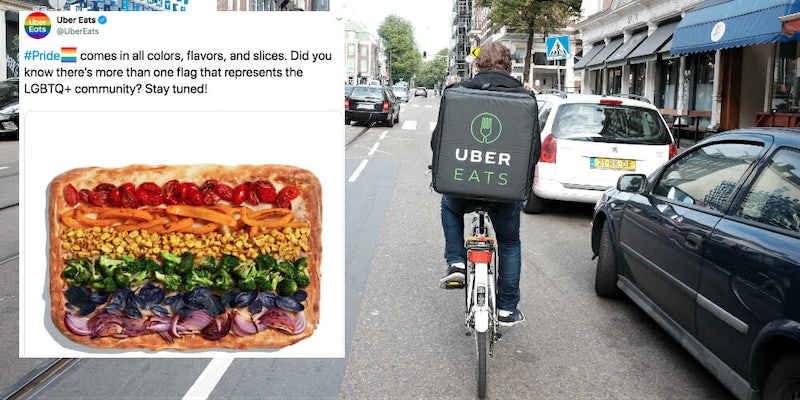 'We just want you to pay your drivers.'

The food delivery company tweeted out a series of flags representing a different section of the LGBTQ community in honor of Pride Month.

One of its creations? A rainbow pizza flag.

#Pride comes in all colors, flavors, and slices. Did you know there’s more than one flag that represents the LGBTQ+ community? Stay tuned! pic.twitter.com/VI9znuDQoC

Food flags were created for the Lesbian, Genderqueer, Agender, Bisexual, and Intersex identities, among others.

In response, the company has received a slew of criticism. People are requesting that Uber Eats stop using the identities of human beings as a business strategy and pay its employees a living wage.

While many are still fed up with the corporatization of Pride, they also find Uber Eats’ marketing tactic better than others by spotlighting the lesser-known identities within the LGBTQ community.

“I hate brands taking advantage of queer people as much as the rest of you, but I find these posts heartwarming and educational,” Twitter user @Rikjavic wrote.

“Intersex people are wonderful,” Twitter user @CrockerCurse wrote. “But they continue to ask us NOT to be added into our community by default. Instead of doing it anyway, maybe LISTEN TO THEM.”

You know what? You may be a multifaceted organization responsible for a mix of good and bad decisions, but i damn support whatever facet does this shit

Although many deem the campaign as decent, that’s only in relation to other more tasteless Pride campaigns. So let’s just stop with the exploitative advertising, people.