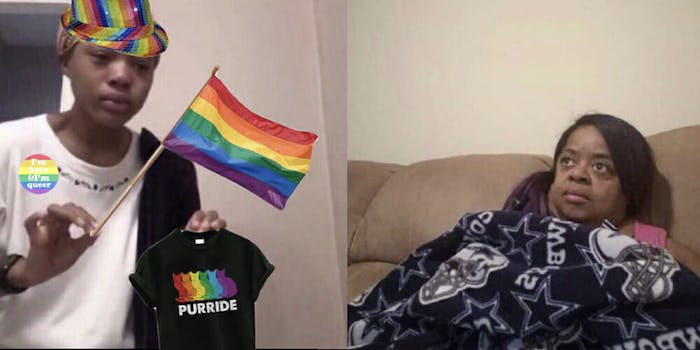 Anti-rainbow capitalism memes fight back against the corporatization of Pride

All the companies showing support for Pride month are a sign of cultural change, but many LGBTQ folks see them as pure cash grabs. The memes making fun of the “rainbow capitalism” are pure gold.

There is no denying that it can be powerful to be surrounded by messages of LGBTQ acceptance, especially when you have more experience with hatred and discrimination. But many folks in the LGBTQ community are tired of the Pride marketing campaigns for a variety of reasons. Not least of which, many companies trying to push their brand with rainbows and claims of support have a history of quite the opposite.

Victoria’s Secret Pink, for example, was recently reamed for tweeting a Pride message despite refusing to hire transgender models. YouTube was similarly criticized for having rainbow branding despite regularly demonetizing LGBTQ content and allowing anti-LGBTQ harassment on the site.

Happy #Pride from @YouTube, whose logo is rainbow-coloured for June while it monetizes videos that target LGBT people for sustained harassment campaigns. https://t.co/pxu2yqGJ4S

Stop demonetizing and censoring LGBTQ content for a start. And stop making a quick buck off of us.

Companies claiming LGBTQ acceptance often seem to only be doing so now because the message is profitable, but they don’t have sustained support for the community outside of June. The widespread rainbow washing of products and ads has resulted in the rise of the term “rainbow capitalism” and a deluge of hilarious memes from people who can see right through the corporate thought process.

Pride marketing is all the rage! And frankly It is a turn off for some of us because 20 years ago many of these same companies that are today waiving the flag likely wouldn't promote us because we were homos. Now they realise they can cash in on us. Puke… pic.twitter.com/mvVMLm0TV0

companies who do
literally NOTHING
for the lgbtq+
communtiy, trying
to use#pridemonth
to sell their the lgbtq+
mediocre shit community pic.twitter.com/5HcXhLGK4a

Some of the worst Pride branding comes from companies that try really hard to appear accepting but end up creating something deeply awkward and forced.

All that said, even folks who have a deep burning hatred for rainbow capitalism and companies attempting to co-opt Pride can be tempted by clothing companies putting out Pride collections. Drinking beer from a rainbow can or swishing with mouthwash from a rainbow bottle won’t help me connect with my community, but clothes that silently signal my identity actually might.

Fuckin converse put the Trans flag on some shoes like…..yes fine I will buy them you stupid brand, ill bow to capitalism just this once

me: capitalizing on LGBT themed merchandise during pride month is a shallow and apolitical attempt at supporting the gay community driven only by corporate greed.

Me: Companies using Pride to sell you rainbow printed or colored shit you don’t need to further line their pockets is trash. Capitalism won’t liberate us.

Also me: *Notify Me✅* pic.twitter.com/OuFLQ08lLk

While it can be disorienting and hurtful to see companies try to profit off of the LGBTQ community, it’s important to remember the effect that the imagery could have on a child or young person who might not know that it’s OK to love themselves for who they are.

Listen, I understand corporate appropriation of Pride is annoying/highly suspect. But I also know that walking through a shopping mall SCREAMING with rainbows makes this 37yo man feel seen and can’t imagine how it would’ve changed my life as a 10yo. pic.twitter.com/7RBVRinpwW