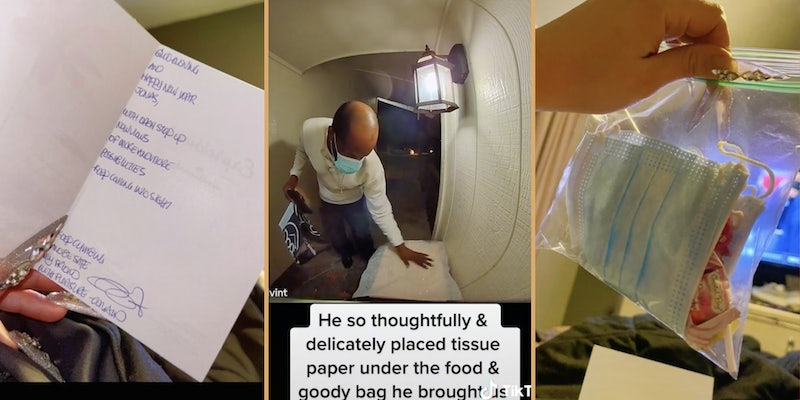 The customer is trying to find the driver so she can properly thank him.

A woman on TikTok is seeking to identify an Uber Eats delivery driver who went above and beyond. Her video has garnered 822,000 views on TikTok, where commenters are urging the food delivery service to reconnect him with her.

“This sweet Uber Eats delivery driver delivered more than just food,” a text overlay on the video reads. “He so thoughtfully and delicately placed tissue paper under the food and goody bag he brought us. It contained masks and some candies.”

The bag also contained a handwritten card and a small printed poem titled “Footprints in the Sand.”

@traceyhairstyles #Helpmefindhim to thank him! I want him to know his actions are appreciated 🥺 Tik Tok do your thing! #tiktokviral #dallastx ♬ Surrender – Natalie Taylor

In updates given via comment, Tracey Ramirez (@traceyhairstyles) said Uber Eats declined to give her the driver’s contact information so that she could thank him for his actions.

“Due to privacy reasons they won’t release his full name or info,” she wrote. “I just know his first (name) is Donald.”

Viewers called on Uber Eats to connect Ramirez with Donald so that she and others could thank him for his kindness.

“The fact that he puts extra effort into his job just to make other people smile,” one commenter wrote. “Let’s find him!”

Others wrote that Donald’s kindness touched their hearts.

“I just want him to know that the kindness he did touch a lot of people and hope he may have a good day all his life,” one commenter wrote.

In a follow-up video, Ramirez shared a recording of herself making a phone call to Uber’s customer service line in order to somehow get in contact with Donald or to increase his tip amount. However, the representative on the line told her it could not be done.

Still, viewers have faith that the TikTok will help Ramirez find the driver.

“I trust the algorithm will bring me back when you find him,” one viewer wrote.

The Daily Dot has reached out to Ramirez directly via Instagram DM as well as to Uber Eats via email.