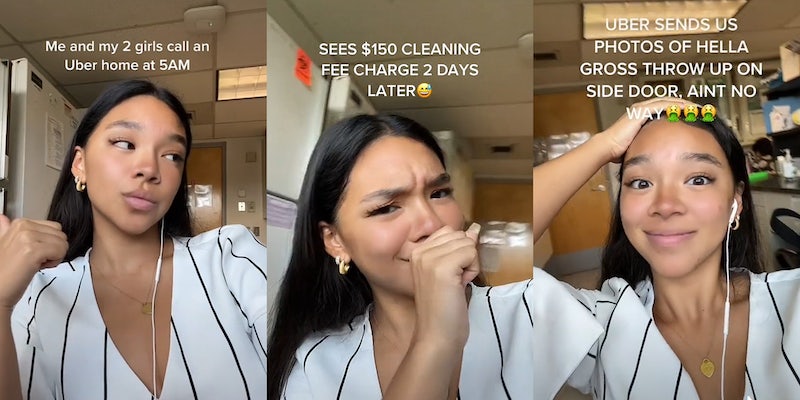 ‘This isn’t the same car we were in’: Woman claims Uber driver tried to scam her out of $150 cleaning fee

'Uber does that ALL the time.'

A young woman’s videos alleging that her Uber driver tried to scam her out of a $150 cleaning fee have drawn attention on TikTok.

The first video posted by @lilmiaprado on Aug. 2 has been viewed more than 2.7 million times. In it, she uses text overlay to tell the story of what happened.

“Me and my two girls call an Uber home at 5 a.m.,” the first text overlay reads. “Gets in a hella nice BMW for an Uber X. Starts talking to driver because we feeling hella social. He’s a nice college kid. Gets home safely! Not even lit just tired. Sees $150 cleaning fee two days later. Confused, I don’t think anyone made a mess.”

As the text overlay continues to spell out the story, Mia explains that after she and her friends confirmed that nothing happened that night with their Uber, they reached out to the ride-sharing service directly, asking for photographic evidence of the vomit Uber representatives told her was left in the car. Mia then claims the photo sent by Uber didn’t appear to be the car they had ridden in.

The Tiktoker said she and her friends then Googled “throw up in car” and the image Uber said the driver submitted as proof was the seventh photo in the search results.

Ultimately, she said they were able to share their findings with Uber, and the $150 charge was reversed.

Some viewers commented that they’d had similar things happen to them.

“This happened to me and I got out of it because I pointed out there was lettuce in the puke and I hadn’t eaten any vegetables that day,” one commenter wrote.

“This has happened to me twice already and had to threaten Uber with legal action before they removed the charge,” another commenter wrote. “I now take a video of the back.”

“This happened to my friend!” a commenter wrote, “She caught it from the drivers iPhone photos, the photo was from 2 years ago!”

The Daily Dot has reached out to @lilmiaprado via email for comment.

Update 11:54am CT August 12: In an email to the Daily Dot, an Uber spokesperson said the TikToker has been refunded and the driver has been banned.

“We have zero tolerance for fraudulent activity of any kind on the Uber platform, and we refunded Ms. Prado’s account as soon as this was brought to our attention,” they said. “The driver has been banned from the app.”