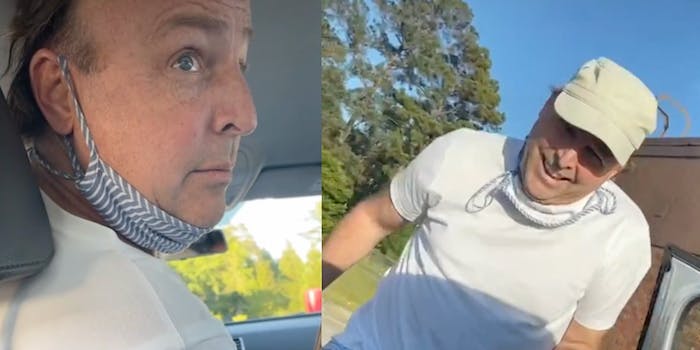 He allegedly wouldn't let the women leave during the two-and-a-half-hour-long drive.

A video has emerged showing a white Uber driver screaming at his passengers, two Black women, as he drove them from South Carolina to Georgia after the women’s car broke down.

Jovene Milligan and her daughter had to take an Uber on Friday when their car broke down in Aiken, South Carolina, according to WCBD. The two were on their way from Charleston to Atlanta.

In parts of a video shared by WCBD, the driver can be seen screaming at the passengers. His words are not comprehensible, and much of the audio is censored, but WCBD reports it is full of racist remarks.

Milligan told WCBD that the driver called her and her daughter the N-word.

The TikTok account name @thedesignerspotatl seen in the video has six videos of the same driver. The videos were seemingly filmed by Milligan from the backseat, though it remains unclear if the account belongs to her. Only one of the videos is without audio, and it appears to be the same one as the video shared by WCBD. The driver is seen erratically moving and screaming as he turns toward the passengers in the backseat in that video.

In the other videos, the driver carries on a few friendly conversations with the woman behind the camera.

“You all right? Am I making you crazy?” he asks after taking both his hands off of the wheel to fix his hair.

In another video, he calls himself a “crazy Uber” and goes on to say “Black people call me Uber Guber.”

Milligan laughs along and continues the conversation.

In another video, he asks Milligan if she wants him to wear a mask. “OK, I got you, I got you!” he says repeatedly.

In other videos, they seem to be having light-hearted conversations about vaccines and his hometown.

It’s unclear how things escalated, but Milligan and her daughter were reportedly not allowed to leave the vehicle during the two-and-a-half-hour-long drive. “He wouldn’t let us out,” Milligan said.

Milligan said she worried about her safety and kept looking at the GPS to make sure they were at least on the route.

“It got very scary, to the point where I didn’t know whether we’d have to protect ourselves,” Milligan told WCBD. “The driver was erratic, driving recklessly, he was constantly calling us [N-word].”

Milligan has filed a lawsuit against both Uber and the driver.