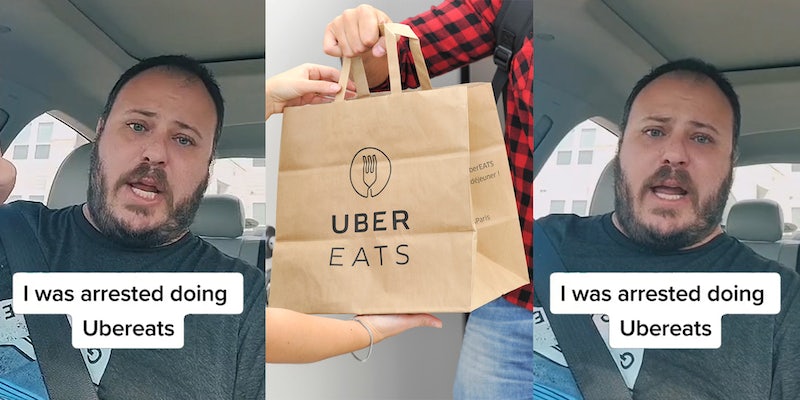 ‘Sounds like our schools are turning into prison grounds’: UberEats driver says he was arrested after delivering food to a school’s superintendent

'Reasonable suspicion of what?'

An UberEats driver went viral on TikTok after sharing that he was allegedly detained by authorities while delivering food to a school in Texas.

User Jonathan (@jonathanreisig) posted the clip on Friday where it has since garnered 260,000 views. In the clip, he explains he had received a Sonic order from a school superintendent. While attempting to deliver the order, he says he was apprehended by two police officers who then searched his car.

Jonathan says he had already been through the school’s gate and was about to deliver the order to the woman when he turned around and noticed the cops behind him.

@jonathanreisig I was arrested and detained for doing an uber delivery to a school for a supervisor. #ubereats #texas #police #desrepectful #arrested #wtf #texaspoliceofficer ♬ original sound – jonathanreisig

The police officers then allegedly asked Jonathan if he was leaving. Jonathan replied yes, since he has just accepted another UberEats order.

“They’re like, ‘you can cancel that order right now,’” Jonathan says the cops told him.

“I don’t know what it was but apparently ‘reasonable suspicion,’” Jonathan says was the alleged reason the cops detained him. “Reasonable suspicion” refers to the lawful procedure where a police officer can stop and justifiably search someone based on special facts and circumstances that they believe arouse suspicion.

Jonathan says the superintendent tried to get involved to defend him but the police officers threatened her with arrest.

“They fucking went through my fucking car,” he continues in the video. “Put me in fucking handcuffs, detained me for like a fucking half hour.”

At this point, six more cops show up, Jonathan says.

The driver says he filed a report and that the school’s superintendent also said she would report the department while submitting a video of the entire incident.

“I’m never taking an order delivery to a school,” he says at the end of the video.

In a follow-up video, Jonathan shared that both officers have been put on administrative leave without pay. While he did not mention which police department the officers belonged to, the TikToker appears to live in Austin, Texas, based on his previous videos.

“Maybe it’s because she’s the superintendent of the district I have no idea,” he says. “Or maybe it was because it was so serious that they considered it ridiculous.”

Jonathan explains that he’s a good upstanding citizen without so much as a speeding ticket, which is why this incident is “ a big deal” to him. He claims the lawyers will handle everything from here on out.

In the comments section, the TikToker clarified he contacted Uber to let them know of the situation. They apparently were getting a lot of the same calls and told him they might just make the app unavailable in those locations.

The Daily Dot has reached out to Jonathan for comment via TikTok comment and Uber via email. We also reached out to the Austin Police Department via its media contact form.