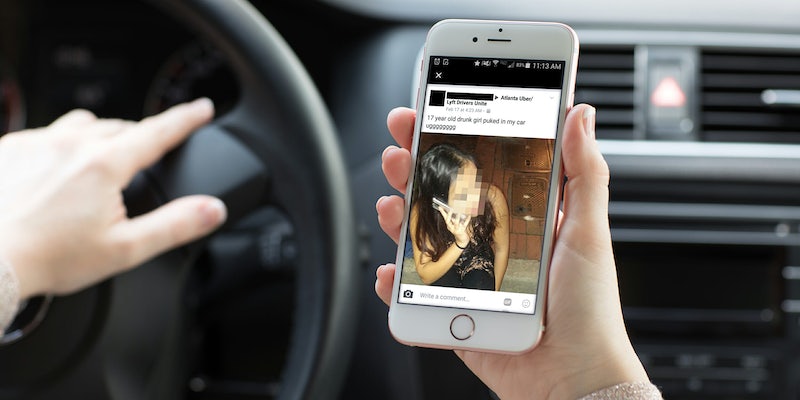 Once you hop in the rideshare, your privacy could be at risk.

“17 year old drunk girl puked in my car, ugggggggg,” an Uber driver shared with fellow drivers in a private Facebook group. It was one of her first days driving for the platform, and she had picked up an underage girl who was extremely drunk. She wanted to vent her frustrations. She also thought to capture the moment. Along with her comment was a photo of the teen on her cellphone covered in vomit.

“Wayment! That’s puke on her? At first I thought it was the pattern of her outfit!” one driver responded.

“Sitting there looking stupid. You wanna b an adult, well missy here’s your chance,” another one said.

While some wanted the photo of the minor taken down, most thought it was funny and relatable. Some advised the driver on how to get Uber to clean up the car. As one poster quipped, “Welcome to rideshare.”

Of course, the 17-year old passenger didn’t know her vomit-covered image was taken by the driver, nor did she know it would be seen by the 10,052 (and growing) members of the “Atlanta Uber/Lyft Drivers Unite” Facebook group. She just thought she was getting a ride home.

Similar stories of unsuspecting customers being secretly roasted and shamed litter the Drivers Unite group. In one thread, a driver joked about “this big giant heffa” he saw while picking up a passenger at a shopping center. He quickly realized that the woman in question might be his passenger, so he cancelled the ride to prevent the woman from entering his car. He later pulled up a pixelated picture of the woman and posted it on the group, to which members proceeded to joke about her weight and praise his “pull off game.”

“Lol AND the cancellation fee. You fucked her good,” one member said. To which another driver replied, “He said his Pull Off game was good not his Pull Out good… She fucked herself !!!”

In yet another instance, a driver took a picture of his blacked-out passenger and praised him for tipping $50 during a surging trip. Drivers laughed at the story, calling it “the 2nd funniest post I’ve read on here yet!” The group’s administrators did not remove the photo.

Private Facebook groups make it easy for drivers—or any service worker or employee or military service member—to violate strangers’ privacy. In one case, the Atlanta group’s admins had to step in and tell users to stop posting identifying passenger info, such as “the address where you picked up the passenger and dropped them off.” Some users praised the measure, but others joked about it. A few drivers legitimately did not understand why it was such an issue to share personal information on the site.

“Maybe I’m stupid but what do bad people do with random house addresses without knowing whose house it is?” one user asked. Nearly a half dozen members agreed.

It’s not hard for a driver to whip out a smartphone and take a photo of a passenger when they’re unconscious or distressed. And because most drivers have dashcams, many passengers are being recorded during trips without their permission to begin with.

Uber allows drivers to “install and use video cameras to record riders for purposes of safety.” Not all drivers are allowed to record their passengers, though. Privacy regulations vary from state to state. California outright bans recording “confidential communication” without permission. Meanwhile, New York drivers cannot record private communication without consent, but they can record videos and photos of their passengers where no communication takes place.

In Georgia, where the Drivers Unite Facebook group is based, the state has relatively strict laws on recording video. The Digital Media Law Project states that Georgia residents must receive the approval of all parties involved before using a device to “observe, photograph, or record the activities of another which occur in any private place and out of public view.”

As Steakley Law Firm points out, that means if anyone in Georgia wants “to video record what is going on in a private place, all parties must consent.” Meanwhile, audio recordings are based on a one-party system, which means a driver can record conversations so long as they are also involved in a discussion. Drivers can record for “security purposes” and “crime prevention”—but not for making fun of passengers.

In fact, while drivers in most states can take pictures of their passengers without permission and upload those photos online, in Georgia, the law specifically outlaws photography taken “in any private place and out of public view” in which all parties do not consent.

In other words, even though the puking teen might not have known the photo was taken and circulating online, because it was snapped on the sidewalk and not inside the car, it could be deemed a legal act on the driver’s part.

But if a driver does upload an illegal photo onto Facebook, is the site personally responsible? Not exactly. Per Section 230 of the Communications Decency Act, Facebook can’t be held legally responsible for their users’ posts. If someone is harassed in Atlanta for photos posted on the Drivers Unite group, Facebook isn’t at fault in the eyes of the law.

“Unless the photo involves a gross violation of the law (like child pornography), site administrators may not see an urgent need to take it down,” attorney Maryam K. Ansari writes for FindLaw.

That said, Facebook removes illegal content when the site becomes aware of its presence. And Facebook also works closely with law enforcement when illegal or criminal activity becomes apparent. According to Facebook’s community guidelines, the site prohibits people from using Facebook to “facilitate or organize criminal activity that causes physical harm to people, businesses or animals, or financial damage to people or businesses” and bars users from “celebrating any crimes [they have] committed.”

But while Facebook has a responsibility to alert law enforcement to illegal content and regulate its site in coordination with the law, criminal responsibility ultimately falls on users—not the site. So in many cases, if a driver decides to post pictures or videos of their passengers online in a private group, they can do so without facing serious repercussions—unless it is brought to the attention of authorities in states where it’s illegal.

This problem isn’t just relegated to the Atlanta Uber/Lyft Drivers Unite group. In one YouTube video posted on the “Uber/Lyft Driver 101” Facebook group, a driver used a dashcam recording to share an adult conversation he had between two female passengers and himself. While the passengers’ faces are blurred out, their voices are clear. A friend, family member, or acquaintance could easily figure out who’s speaking. Independently of Facebook altogether, another driver uploaded a YouTube video of his passenger going on a drunken ramble late at night. The driver’s face is blurred out, but the passenger’s appearance is clearly visible in the streetlight.

These passengers are being viewed and laughed at by thousands of people around the world—and they may never even know it.

The normalization of the unsolicited photo

Not every driver condones this type of behavior, of course. Many see it as reprehensible or inappropriate. A Lyft driver named Marc criticized the Atlanta Facebook group’s posts, noting that the photos were a violation of riders’ privacy.

“I think that was a breach of privacy to distribute it for sure,” Marc told the Daily Dot. “It was pretty mean-spirited to do, but you can get pretty jaded after a while of dealing with dumb drunk people. People like to complain about work with mutual workers, so something like this group was bound to happen.”

Another member of the Atlanta Uber/Lyft Drivers Unite group, who prefers to stay anonymous, is also horrified by the drivers’ behavior. That source believes some of the community’s drivers are unfit for ferrying passengers from one location to another because they do not have the professional training needed to protect their passengers.

“Most of what is posted on there is harmless, but there are quite a few people who said some really derogatory things in a totally cavalier way. It really sunk in that these drivers have little or no oversight. There seemed to be no professional standards,” they told the Daily Dot. “I certainly saw things where I thought to myself, ‘Gee, I hope I never end up in that person’s car.'”

Uber’s Community Guidelines make it clear that physical contact with a rider is explicitly against the rules. But what about taking, posting, and distributing photos without passengers’ consent?

“Uber does not have a policy prohibiting drivers from using cameras, but they are expected to follow applicable laws while providing Uber services, including laws relating to photography and video recording,” Uber’s head of security and privacy communications, Melanie Ensign, told the Daily Dot. “These laws vary from state to state, and drivers can be banned from the Uber app if they fail to comply with local laws. We investigate reports of unlawful conducted committed by drivers or riders using our services.”

So while Uber punishes drivers who engage in unlawful recordings, there isn’t a set guideline that protects riders’ privacy. That’s left to state and federal laws.

A symptom of Uber’s flawed culture

On June 13, former U.S. Attorney General Eric Holder of Covington & Burling released the findings from his investigation into Uber’s workplace culture. The 13-page report offered a litany of recommendations for the startup that included adding an oversight committee, a chief operating officer, performance reviews for top executives, and other measures intended to increase transparency, accountability, and diversity at the company—all of which were adopted by Uber. The report led to the exit of former CEO Travis Kalanick and Emil Michael, Uber’s former head of business.

But the investigation was limited almost entirely to Uber’s corporate operation. It ignored issues with Uber’s workforce—the drivers who quite literally make the company run.

In the context of the company’s PR debacles, the privacy issues exposed by the Atlanta Facebook group can be seen as a symptom of larger failures at Uber. But while Holder’s recommendations could help cure the office culture at the company, it’s not clear if, or how, that could translate to improvements for those behind the wheel or buckled up in the backseat.

If Uber and Lyft want to resolve their privacy issues, one solution could be to introduce training systems that go over passenger treatment, personal boundaries, and what to do with unruly riders. The companies could also create an avenue for users to report privacy violations like those displayed in the Drivers Unite Facebook group. But doing so would take a long-term commitment to the drivers that both companies have been largely neglecting, seemingly assuming that there’s always another driver out there to replace them.

“[Uber has] created a lot of resentment among the drivers over things like cheating drivers out of fares with the upfront pricing feature and not offering a way to deal with items left behind by passengers, except to force the driver to lose out on time and gas to return property without any compensation,” our source said. “Uber does not invest in [its] drivers, and at the end of the day, it’s a low paying ‘job’ that doesn’t generate the fear of termination or real incentives that you would see in more traditional employment structures.”

Without regulations or education for drivers, it may only be a matter of time before passengers take their business to a newer, safer company—one perhaps where drivers aren’t mocking and sharing their photos in private Facebook groups.