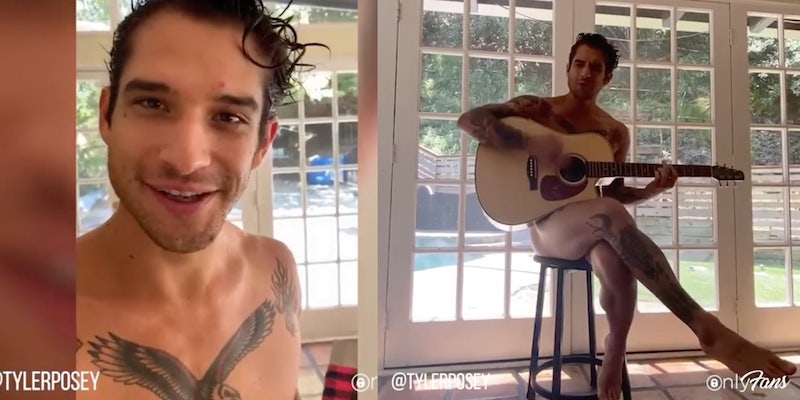 Teen Wolf star Tyler Posey has joined adult social media site OnlyFans at the request of his fans in a move he says gives him the opportunity to bond with his fans.

“You guys asked for it, and I supplied it,” Posey, 28, announced on Instagram on Monday. “I now have an only fans. Follow the link in my bio and come get wet with me! Haha.”

The caption accompanied a short video, watermarked with the OnlyFans logo, with a dramatic twist.

“OnlyFans presents actor, director, musician Tyler Posey,” the text reads in between clips from his movies and TV shows, some of his shirtless poses he’s famous for. The video ends with the Now Apocalypse star sitting naked on a stool, playing his guitar and singing “welcome to my OnlyFans.”

Posey said in a statement that he was getting requests from his fans asking for an OnlyFans account, and he saw it as a “really cool opportunity.”

“I get to talk about things on OnlyFans that I maybe wouldn’t get to otherwise and connect with more people like me,” he said in a statement, according to Pride.com. “I want to accomplish creating unique content and collaborating with my friends to bring a fun experience to my fans.”

Posey’s video advertising the account had received almost 390,000 views within a few hours, topping views on his other videos by hundreds of thousands.

“This isn’t what I signed up for when I started watching Teen Wolf, but honestly I love what they’re doing with this season,” one commenter wrote.

Subscribes can pay $14.99 per month for Posey’s exclusive OnlyFans content. However, some have commented that the Teen Wolf star hasn’t posted shared any nudes. “No nudes y’all. Don’t subscribe,” one Instagram user wrote.

But some fans are just happy with the prospects.

“I thought this was A JOKE BUT THEN TH GUITAR LET ME BREATHE,” wrote one user. “I will stop paying Netflix for you,” wrote another.