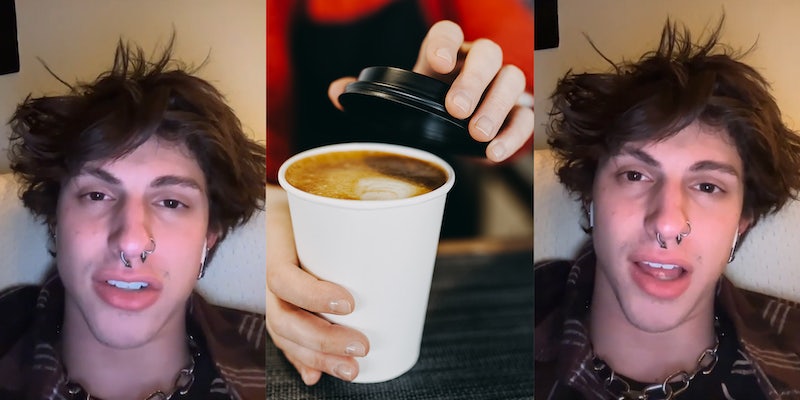 ‘2 drinks I can make in 2 minutes, and I make less than that in an hour’: Barista points out 2 drinks cost more than hourly wage

'People spend my entire paycheck in a 5-minute transaction.'

A barista—who clarified he does not work for Starbucks—used the cost of the average coffee to point out the historically low pay for those who make and serve them.

In the video, user @rykohio says that two beverages he makes in two minutes can easily exceed his own hourly wage.

“It is so fucked up that, as a barista, someone can come up and order two drinks that cost more than what I make in an hour,” he says in the video. “Two drinks that I can make in two minutes. And I make less than that in one hour.”

if my boss sees this no u dont

His video garnered over 1 million views on TikTok.

He clarified that he does not work at Starbucks, telling viewers that the problem itself is “bigger than Starbucks” in a comment. According to Payscale, a data collection site that allows users to see what the market rate for their industry is, the average pay nationwide for a barista in the U.S. is $11.27.

Some viewers shared their own experiences of contextualizing how much a customer spends at their job versus how many hours they would have to work in order to spend that money.

“Me working retail when people spend my entire paycheck in a five minute transaction,” another commenter wrote.

This realization frustrated many viewers, who shared that it wasn’t just employees in the food and beverage industry experiencing this.

“No because literally all industries at this point are like this,” one commenter wrote. “Why am I getting paid $15 an hour to clean hotel rooms that cost $300-$400 a night?”

“At Target we have access to see how much we make in a day for the store and we literally make more in one day than half of us combined make in a year,” another said.

The Daily Dot has reached out to @rykohio via Instagram direct message regarding the video.