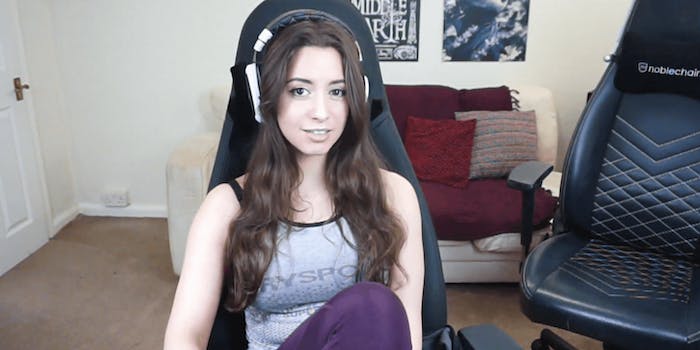 The stalker has been banned from her town and could face prison time if he violates the ban.

Popular Twitch streamer Sweet Anita revealed yesterday that her stalker has been arrested and convicted after a harrowing public incident.

The U.K. streamer first detailed her stalker’s exploits on Twitter in November, sharing that he “spent hours outside my house, he even slept behind my house, and managed to assault me.” She alleged that the stalker had a knife on him when police caught and detained him, but despite a confession to harassment and evidence provided by Sweet Anita and her friend, authorities released him.

“I’m very used to the lack of protection from the police at this point, I guess I’ll have to get used to seeing him around too,” she tweeted on Nov. 8.

During an April 7 broadcast, Sweet Anita said she was shopping around town when her stalker began harassing her, quickly escalating things to the point that nearby store owners had to intervene. Here’s her full explanation:

The other day, some shopkeepers had to intervene and kind of hold him back while he chased after me, ‘cause he waited outside my house, followed me into a shop, and waited for me outside the shop. And when I told him to leave me alone and asked if he had a knife, he didn’t respond. And when I said, “Are you gonna let me walk home alone?” he said yes. And then when I went to cross the road, he started chasing, and two guys ran out of the shop and grabbed him and then grabbed hold of the gate to another area of town. So I went through the gate, and they held it closed so that he couldn’t pass them and continue to follow me. It’s not the worst thing he’s done. He has actually physically assaulted me.

Sweet Anita told her stalker she had filmed the interaction and threatened to call the police, yet he still followed her home and stood outside her house, waiting for her to come back outside. The streamer did call the police, and they picked him up. Still, based on the police’s previous inactivity, she was skeptical anything would come of it.

“He was released after assaulting me, and that was the most serious thing he did and they did fuck-all, so I kind of didn’t have any hope,” she said.

This time, however, several more witnesses could testify to the stalker’s behavior. After interviewing the two intervening shopkeepers and holding the stalker overnight, police pressed charges for stalking. The stalker has been banned from visiting Sweet Anita’s town and could face two months in prison if he violates the ban.

Sweet Anita shared the news with her Twitter followers yesterday, cautiously optimistic that her stalker will leave her alone now.

“There is a restraining order, and suspended sentence of 2 months in prison,” she wrote. “I really hope that he honors this and I will finally be safe!”