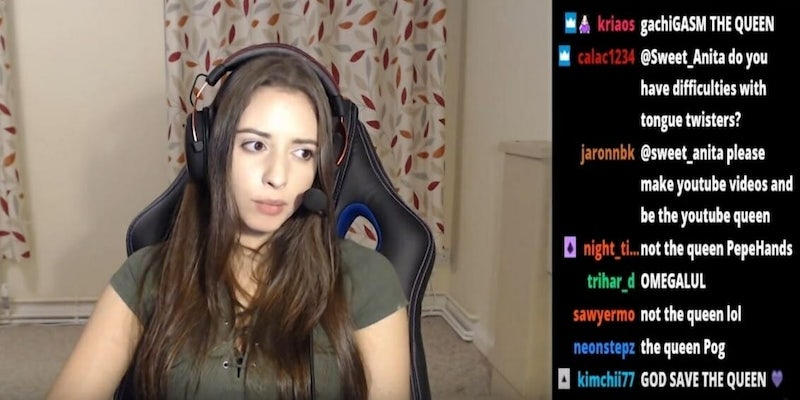 'My stream is for a mature audience only.'

Twitch streamer Sweet_Anita has Tourette’s syndrome, which can cause her to utter embarrassing and profane phrases any time she’s speaking.

It’s probably not an ideal disorder for a livestreamer to have when they’re in the middle of, you know, streaming themselves live on the internet. But Anita is embracing her Tourette’s and, as a result, she’s gone viral and her channel has massively spiked in popularity. As Dexerto points out, her channel, currently at more than 86,000 subscribers, has grown more than 70,000 in the month of October.

And her attitude toward her disorder—which, according to WebMD, is “a problem with the nervous system that causes people to make sudden movements or sounds, called tics, that they can’t control”— has been embraced. Anita calls her tics “obscene hiccups.” It happens when she’s streaming on Twitch. Here’s how she handles it.

In one stream, she explained that she wasn’t diagnosed with Tourette’s until she was 24 years old (she’s 28 now) and she discussed how she occasionally utters the N-word during her tics. She also said that sometimes her tics reveal the truths about others that some people would not reveal, which she said can be “very, very fucking awkward.” She also said livestreaming has boosted her confidence as a public speaker.

Plus, as demonstrated at about the 6:00 minute mark of the following video, she’s a dynamite whistler.

On Twitter recently, Anita went into more detail about how she has to handle her Tourette’s.

She wrote, “People have no idea how much #tourettes impacts our day to day lives. Every time I get in a car or taxi I have a speech for the driver, it goes like this; Hi I have tourette’s, if I shout cats please don’t slam the breaks. If I offer to fist you I don’t mean it! Which has lead (sic) to a lot of questions and cool conversations about tics. However I once got in a taxi with a taxi driver, and he cut me off. “Yeah it’s ok I know, you’re the one who doesn’t tic during sex.” I don’t remember him but I really hope he found that out through talking.”

I open the front door to my Tesco delivery man and said, "Hi, CAN I FUCK YOUR FRIENDS?" He didn't even blink he just said "I haven't brought any friends but here's your shopping"
Legend.#tourettes

On her Twitch channel, she wrote that she’s open to discussing her Tourette’s to anyone who’s interested and that among her most awkward tics are ones involving “firemen, nurses, and customer service workers.”

“My stream is for a mature audience only,” she wrote, “as I say some pretty inappropriate things about cats and Jesus.”