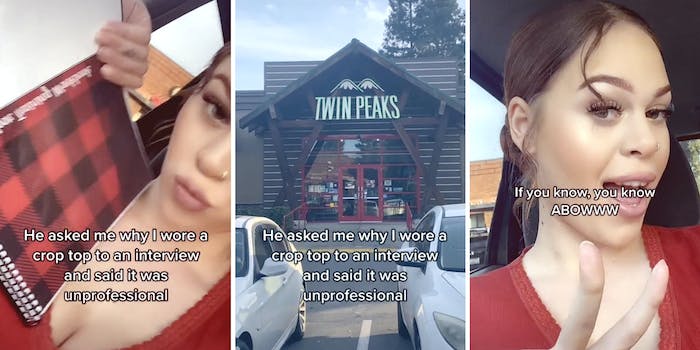 A TikToker revealed in a viral TikTok that a hiring manager at Twin Peaks called her “unprofessional” for wearing a crop top to the job interview at the restaurant.

In the video, Em (@xoemmss) records herself in the shirt she wore to the job interview. The overlay text in the video states, “He asked me why I wore a crop top to an interview and said it was unprofessional.” The video then cuts to a Twin Peaks location and various items of Twin Peaks gear, indicating she got the job.

“If you know, you know,” the text overlay continues.

“Bae you don’t understand they need to know I have t!ts,” the caption of the clip reads.

Her video amassed over 1 million views and numerous comments from people showing their support, revealing what they wore to interviews they aced. “I wore skinny jeans and a long sleeve shirt and got the job,” one commenter wrote.

Others seemed to agree with Em, saying: “You have to dress for the part.”

“You don’t dress the same for an interview at Walmart vs a bottle girl at the club,” another said.

Em then posted videos featuring her outfits as a server at Twin Peaks, which consists of form-fitting bodysuits and crop tops.

One person questioned, “So what are you supposed to wear to an interview since what you wore wasn’t acceptable?”

In response, Em said that she “has a whole video in the works [she’s gonna] post this week.”