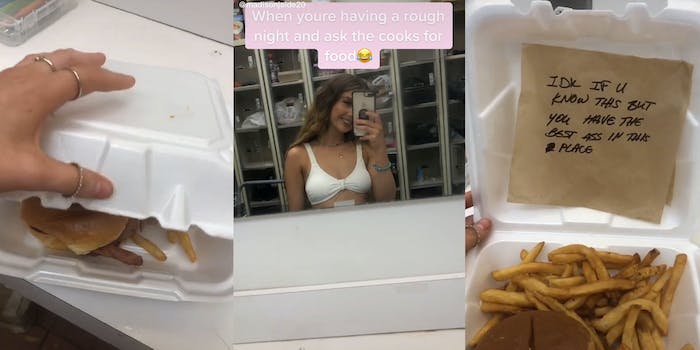 ‘This will either make the girls night, or a phone call with HR’: Cook compliments worker’s butt in to-go box note, sparking debate

'No guy has handwriting that good.'

A TikToker shared a note that she got from her co-worker, a cook, telling her that she has “the best ass in the place.” Commenters are discussing whether or not the note was appropriate.

Madison Jaide (@madisonjaide20), who is a Twin Peaks server, posted a TikTok on June 21 showing the note was written on a napkin placed inside a styrofoam to-go box. She said after having a “rough night,” she asked the cook for some food.

“IDK if you know this but you have the best ass in the place,” the cook wrote to Jaide. In her TikTok’s caption, Jaide called the cool a “real one.”

Some commenters on Jaide’s video assumed that she either wrote the note herself or that the cook who wrote it has a girlfriend.

“No guy has handwriting that good,” @assassinsblade commented.

“His gf at home seeing this,” @savnauu500 wrote with a smiling, tearful emoji.

In response to both assumptions, Jaide posted a follow-up video. The video shows a cook named Josh saying he wrote the note to Jaide and that he doesn’t have a girlfriend.

Other commenters mentioned that Jaide may have been uncomfortable with Josh’s note.

“This will either make the girls night, or a phone call with HR,” @alex_gorell1 commented.

Jaide told the Daily Dot in a TikTok direct message that she didn’t think Josh’s actions were inappropriate.

“The cook and I are close friends so coming from him the statement didn’t offend me whatsoever,” Jaide said. “I worked very hard to get back to a healthy weight after being in an abusive relationship so I took it as a compliment.”

She also said that the cooks at Twin Peaks take “very good care” of the restaurant’s servers and “always brighten [their] gloomy days.”

“This cook [in] particular was just trying to make me smile on a very bad day,” Jaide said.

The Daily Dot reached out to Twin Peaks.