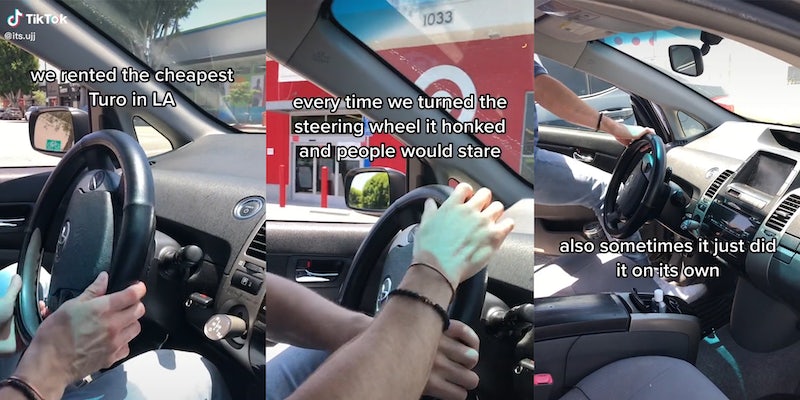 'We ended up getting kicked out of this parking lot because the car wouldn't shut up.'

A customer says that the car they rented from Turo, a carsharing company, honked every time they turned the wheel in a now-viral TikTok.

In the video posted by TikToker Ujjwal (@its.ujj) on Saturday, he shares that he rented the “cheapest Turo in LA,” but it had a major issue.

“Every time we turned the steering wheel, it honked and people would stare,” the text overlay reads. “The owner accused us of breaking his car and called us a ‘bunch of kids’ when we told him about the issue.”

The video shows a man driving around while the car’s horn honks as it turns. Ujjwal also notes in the video that the horn would also honk randomly.

“If you think this is bad just wait to see the replacement car the owner gave us,” the caption reads, hinting at the follow-up video in which Ujjwal shares the issues with their next vehicle.

The initial video has amassed over 109,000 views since Monday. Several commenters shared their own experiences with Turo rentals.

“One time I rented a Turo in LA that wasn’t supposed to be on the road without knowing and I got pulled over and searched and then they towed It,” one user wrote.

“Turo is a joke. For customers, you got cars like this. For owners, your car will be ruined and you not getting enough pay for it,” another said.

“I rented a Mercedes on Turo once, and it had several issues. Oil leak, and bulbs out. Owner didn’t not do any maintenance,” a third added.

In the follow-up video, Ujjwal says that after “complaining multiple times” the owner offered a replacement car. However, a clip shows the replacement vehicle’s alarm going off in a parking garage with text overlay reading, “the new car’s alarm would constantly go off and we couldn’t turn it off.”

Ujjwal says that they tried to drive it to see if the alarm would turn off, but an additional clip shows the car’s alarm ringing as they drove out of the parking garage. The video is captioned, “the owner finally replaced the car with another Prius, this one was somehow a million times worse.”

In the comments, several users speculated that the owner was renting out stolen vehicles, due to the cars’ conditions, but these speculations are unconfirmed.

“Wouldn’t be surprised if they were stolen cars. SMH,” one user wrote.

“Sounds like this owner is renting out stolen cars to me,” another said.

Update 6:45pm CT, June 13: In a TikTok direct message to the Daily Dot, Ujjwal clarified that the incident in the video was two years ago.

He said Turo “sided with the owner” and didn’t refund Ujjwal’s roommate, who used his account to book. He also claimed that the owner of the cars gave his roommate “two separate one-star reviews” and accused them of being “a bunch of irresponsible kids.”

“Today, my roommate tried to check his messages with the owner and turns out [Turo] had deactivated his account,” Ujjwal told the Daily Dot. “Suffice to say, I don’t use Turo anymore.”

Update 7:07am CT, June 16: A Turo spokesperson told the Daily Dot in a statement: “We have learned about the issues experienced by this guest during a trip from several years ago. Our archives show the guest was not charged for this cancelled reservation, and the host and their vehicles have been inactive on the platform for years.”

The spokesperson added that while “these instances are extremely rare in our marketplace, we remind our Turo community that vehicle issues should be reported to our customer support team as soon as possible, and any vehicle exchanges should also be conducted via our dedicated customer support team for expedited and ensured service.”