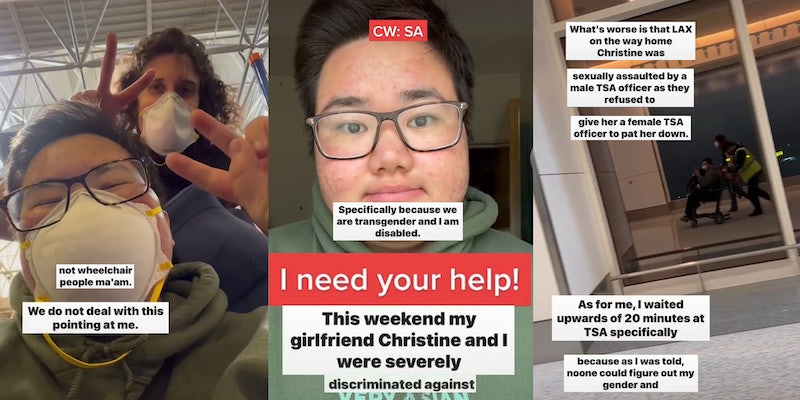 August Rocha posted about his experiences at both airports in a TikTok on May 23. Rocha categorized the discrimination he and his girlfriend Christine faced as severe.

Rocha says at Mitchell Airport, TSA agents forced him to stand for over 20 minutes without his mobility aids—which Rocha says he “cannot do”—and misgendered Christine. Rocha also says that TSA agents in Milwaukee broke the break on his walker.

Rocha says that at Los Angeles International Airport, Christine was sexually assaulted by a “handsy” male TSA officer after her request for a female TSA officer for a pat-down was refused.

“He commented on her breast size and well as saying that he was ‘good with the transgenders,'” Rocha says in the video. In an Instagram post about the experience, the TikToker says that his pat-down included “the most thorough interrogation into my trans medical history [he has] ever encountered.”

Rocha also says that he waited over 20 minutes at TSA because he was told that “no one could figure out [his] gender and therefore they did not want to touch [him].”

Commenters on Rocha’s TikTok tagged TSA and the involved airports’ TikTok accounts. Others shared that they related to his story.

“I’ve had similar experiences,” @gooseneckgawkgawk commented. “I hope you get justice.”

“TSA has always failed our community and so many others,” @jabroni_them wrote. “I hope those employees will be held accountable.”

“I’m 35 with a pacemaker. I can’t go through the metal detectors. I am told to stand by them. I was also told my patience was suspicious when I waited,” @roadtodrjc commented. “Personhood should be respected.”

In a follow-up TikTok, Rocha says that he reached out to the American Civil Liberties Union of Wisconsin. Rocha told the Daily Dot that he plans to contact the Human Rights Campaign, as well.

Rocha posted on his Instagram story that after he emailed TSA administrator David Peskoske, he received a notification that his email had been blocked.

Rocha and his girlfriend are hoping for monetary compensation for what they endured.

“We will be impacted by this for the foreseeable future. That takes therapy, walker repairs or replacement, and time we do not have,” Rocha told the Daily Dot. “They are a government agency. We were their customers. It’s the least they could do.”

He says he’s also hoping for policy change from TSA for trans and/or disabled people who “interact with TSA in the future.”

“This has hurt us as well as our communities,” Rocha told the Daily Dot. “This is inhumane.”

In an email to the Daily Dot, a spokesperson for TSA said the agency is looking into Rocha’s claims.