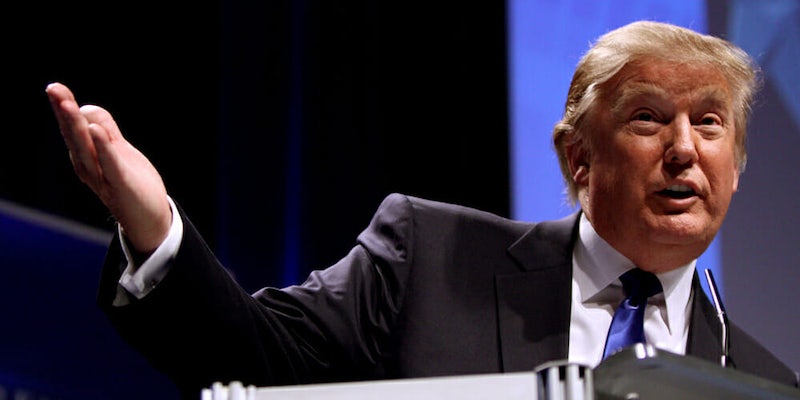 It was a metaphor for not giving up.

President Donald Trump has spent a lot of time talking about how walls work during his push for one along the country’s southern border. But he had some different advice for students during a commencement speech in 2004.

A video of the speech, which was resurfaced by The Daily Show on Wednesday night, shows Trump speaking to students at Wagner College in Staten Island, N.Y., as the Washington Post notes.

In the speech, the now-president tried to inspire the students using a metaphor of a “concrete wall.”

“I’ll tell you, to me, the second most important thing, after love what you do, is never, ever give up,” he said. “Don’t give up. Don’t allow it to happen. If there’s a concrete wall in front of you, go through it. Go over it. Go around it. But get to the other side of that wall.”

On Wednesday night, the Daily Show decided to poke fun at Trump’s desire for a border wall—which has been at the center of fraught discussions amid the partial government shutdown for nearly three weeks—by using the video.

“Oh man, once Trump gets his wall he better hope no one shows Mexico this old video we found,” the comedy show tweeted.

Oh man, once Trump gets his wall he better hope no one shows Mexico this old video we found. pic.twitter.com/FtzeGlmecz

That walls “work” has been the most strenuous argument coming out of conservative camps in recent weeks. But Trump himself once said that a wall shouldn’t stop determined people.

Trump, however, has also abandoned his hope of a concrete wall. The president has recently been saying his border wall could be made of “steel slats.” But that may have its own host of problems.

NBC News reported on Thursday morning that a steel slat prototype of the border wall was able to be sawed through. The Department of Homeland Security asked the Marine Corps to try and destroy the prototype with common tools, according to the report.

EXCLUSIVE: DHS test of steel prototype for border wall, Trump's preference, showed it could be sawed through.

You can watch all of Trump’s Wagner College speech here.