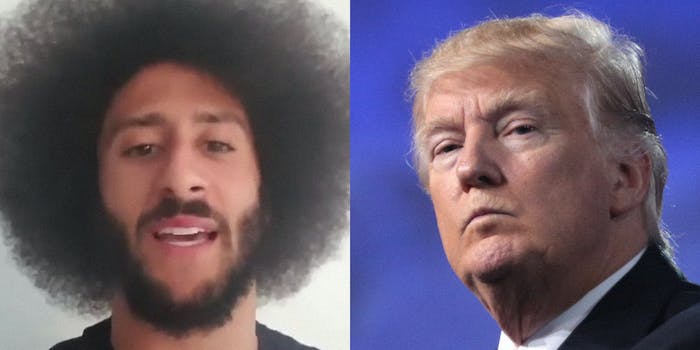 There's a long history of blacks peacefully protesting—then whites doubling down on oppression.

As we head into the second week of Colin Kaepernick’s status as a free agent in the NFL, it’s been widely speculated that teams are snubbing the quarterback over the “controversy” of his taking a knee during the national anthem last season. On Tuesday, President Donald Trump, who is arguably the most powerful man in America, gloated that he was responsible for the player not being signed.

In punishing Kaepernick for exercising his right to free speech as a black man, both the NFL and Trump are participating in a tradition more American than American football itself—a tradition that stems from American slavery: The use of economic, political, social, and violent terrorism against black people who dare challenge the status quo, even in a non-violent way.

“Without citing the hundreds of examples littered throughout history, it is evident that politically outspoken black people in America are viewed and treated as a threat to the ‘American’ way of life,” civil rights activist Francisco Pucciarello explained to the Daily Dot. “Colin Kaepernick’s ‘kneel of solidarity’ with other black Americans emphasizes this truth by bringing politics into the living rooms of families who may only ever watch football and not otherwise pay mind to the atrocities committed against people that don’t look like them, to the people that breathe life into the American traditions we all love so much. These families felt threatened by the idea that they had to face the brutal truth of racism, and preferred to react with condemnation, disapproval, and anger.”

More than 100 years before the first game of American football was played between Rutgers and Princeton in 1869, a cycle of terrorism against African-Americans who dare stand against losing their freedom and dignity was already established. In the early 18th century, enslaved Africans peacefully protested by running away and slowing down work. While a few were able to escape to Florida, eventually white slave-owners cracked down on those who attempted to flee. Brutal forms of punishment were enacted: branding, being torn apart by dogs, hanging, shackling, burning, and imprisonment. Through state-sanctioned, violent terrorism, the colonists maintained their control of the enslaved. And as a result, bloody slave-led rebellions erupted.

For the sake of progress, Americans will argue that black Americans should allow slavery and its history to be a thing of the past. After all, what could Trump’s proud revelation that he, the president of the United States, is in any way culpable for the economic punishment of a black football player have anything to do with what happened during slavery, anyway? So much has happened since then. Blacks are no longer slaves. Signs no longer hang above bathroom doors that read “whites” or “coloreds.” We even had a black president!

Along the way to this progress, though, America has employed varying forms of terrorism against black people who stand in opposition to racism, even when all they are doing is peacefully asking for equality.

“In punishing Kaepernick for exercising his right to free speech as a black man, the NFL and Trump are participating in a tradition more American than American football itself: The use of economic terrorism against black people who dare challenge the status quo, even in a non-violent way.”

For example, in the Tulsa, Oklahoma neighborhood of Greenwood, African-Americans rallied together and established “Black Wall Street,” a vibrant, successful area that had its own schools, shops, and airport after blacks were not allowed to establish themselves in white neighborhoods because of segregation. In 1921, whites from the neighboring town massacred hundreds of the town’s black residents and burned it to the ground. In the aftermath, when trying to rebuild, blacks faced punitive re-zoning laws enacted by Tulsa’s white politicians and businessmen.

During the Civil Rights era, Dr. Martin Luther King Jr. was assassinated, supposedly by a racist lone wolf, but not before J. Edgar Hoover, the first director FBI, tried to discredit him and implored him to kill himself. Rosa Parks was jailed for demanding the right to sit wherever she pleased on a public bus. Muhammad Ali, a champion of civil rights, was banned from boxing for three years during his prime for refusing to be drafted into the U.S. Army because of his opposition to the Vietnam War, which pushed him to the brink of economic insolvency. In 1985, police got into a standoff with MOVE, a Philadelphia-based black liberation group that lived communally and frequently engaged in demonstrations against racism and police brutality. The standoff ended when a police helicopter dropped a bomb on MOVE’s headquarters, killing 11 of its members, including five children.

More recently, in the 1980s and 1990s, the government’s war on drugs led to the imprisonment of millions of black people for nonviolent drug offenses. In the early 2000s, after ignoring black communities for decades, banks targeted high-income black families for subprime mortgages, leading to foreclosures, and pushing many black families and entire communities toward economic insolvency. This has not only put black families out of housing, but has crippled the tax base to fund schools and other social services to black communities.

And in recent years, Black Lives Matter, despite only promoting non-violent protests, has been branded a terrorist group by the right and many of its members have faced arrest.

For every action—black resistance of or triumph over racism and inequality—there continues to be an even greater and opposite reaction: white political terrorism, social terrorism, economic terrorism, or some combination thereof.

“As a reported third of football fans boycotted telecasts over Kaepernick, and Trump chuckles at his politically minded civic activism, league GMs aren’t biting on a high-upside, low-rent backup.”

As it stands, the NFL and President Trump’s response to Kaepernick’s peaceful protest against police violence proves this cycle endures. The NFL is an American monolith with a vehemently conservative management streak. Trump’s most high-profile friends during his campaign were head coaches who stumped for him at rallies and press conferences, like John Harbaugh and Rex Ryan. The league’s most high-profile hero, Patriots quarterback Tom Brady, famously adorned his locker with a “Make America Great Again Hat” and refused to visit the Obama White House in 2015. And while Twitter eggs call for Kaepernick to stick to sports, they didn’t seem to mind it when, just this week, league legend and Denver Broncos General Manager John Elway sent a letter in support of Trump’s Supreme Court nominee Neil Gorsuch.

Make no mistake: Kaepernick is a shell of the explosive up-and-comer who led the 49ers to the Super Bowl during the 2012-13 campaign. He’s lost weight and regressed as an athlete; given the chance to earn his long-term gig in 2016, San Francisco won one game with Kap under center. But given the league premium on his position, and the scores of terrible QBs who remain gainfully employed, the fact that Kaepernick can’t get a job as a reserve player is almost surely a direct result of his political baggage.

As a reported third of football fans boycotted telecasts over Kaepernick, and Trump chuckles at his politically minded civic activism, league GMs aren’t biting on a high-upside, low-rent backup. The Department of Defense pays the NFL millions for its pre-game patriotic fireworks, after all, and money talks.

And all the while, Kaepernick has protested peacefully. He has also put his money where his mouth is. “I will donate $1 million plus all the proceeds of my jersey sales from the 2016 season to organizations working in oppressed communities—$100,000 a month for 10 months,” Kaepernick said back in 2016. And he is making good on that promise.

Since then, Kaepernick donated $25,000 each to the Silicon Valley De-Bug, Causa Justa/Just Cause, Urban Underground and Mothers Against Police Brutality. In November, in addition to his gift of $25,000 to the BYP100, he donated equal amounts to Gathering For Justice/Justice League, Communities United for Police Reform, and the I Will Not Die Young Campaign. Shortly after Trump’s remarks, Kaepernick made a $50,000 donation to Meals on Wheels America, which the administration plans to cut, as well as another $50,000 donation to the Love Army for Somalia, a social media campaign raising money for starving people in the African nation.

If taking peaceful action and donating to charity is a joke—or worse, a threat—it seems there truly is no “good” way for blacks to protest inequality or racism.

Slavery taught us that people can only be oppressed for so long, in spite of attempts to peacefully better their circumstances, before violence becomes a more likely response. So if Trump really cares about his bottom line as well as the country’s, it might be in his best interest to meet peaceful black protest with understanding, not punishment. Otherwise, we risk not just a race war and a grand-scale boycott, but the safety and well-being of all Americans.