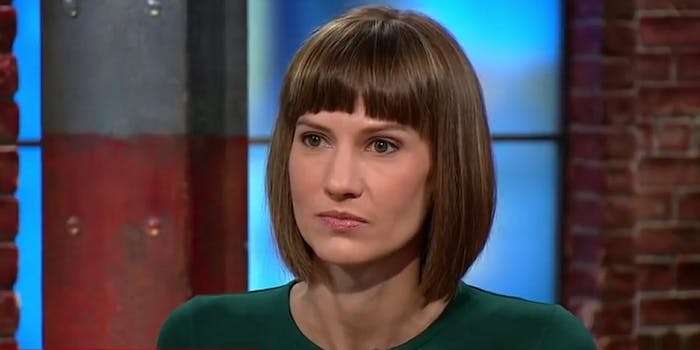 Rachel Crooks is one of over 20 women who has come forward with sexual misconduct allegations against President Donald Trump. It is this alleged injustice that has propelled her to run for office—and after last night’s primary, she is just one step closer to serving in the Ohio House of Representatives.

“We’re still waiting for the final count, but it was uncontested, so we’re happy,” Cooks’ campaign manager, Chris Liebold, said last night according to the Washington Post. “We look forward to the race ahead.”

Crooks is running for District 88’s seat in the House against incumbent Rep. Bill Reineke (R), who has been in office since 2015. Both candidates will face off during this year’s general election on Nov. 6.

In 2016, Crooks told the New York Times that Trump forcefully kissed her in 2006 after she introduced herself while he waited for an elevator. At the time, Crooks worked as a receptionist for Bayrock Group, a real estate firm in Manhattan’s Trump Tower that occasionally worked with Trump. Now, over a decade later, Crooks says she is partly running for the position to share her story with voters, the Post reports.

“I know there are many worse forms of sexual harassment, but doesn’t this still speak to character?” Crooks told the Post in a February profile. “I don’t want money. I don’t need a lawsuit. I just want people to listen. How many women have to come forward? What will it take to get a response?”

President Trump previously denied Crooks’ accusation, claiming he did not know Crooks and that he would never forcibly kiss someone “in a public space with live security cameras running.” Crooks, in return, asked Trump to release the footage from Trump Tower.

“Please, by all means, share the footage from the hallway outside the 24th floor residential elevator bank on the morning of January 11, 2006,” Crooks tweeted in late February. “Let’s clear this up for everyone. It’s liars like you in politics that have prompted me to run for office myself.”

Please, by all means, share the footage from the hallway outside the 24th floor residential elevator bank on the morning of January 11, 2006. Let’s clear this up for everyone. It’s liars like you in politics that have prompted me to run for office myself. https://t.co/ir7EEKoXRU https://t.co/GmkkZ5jUc7