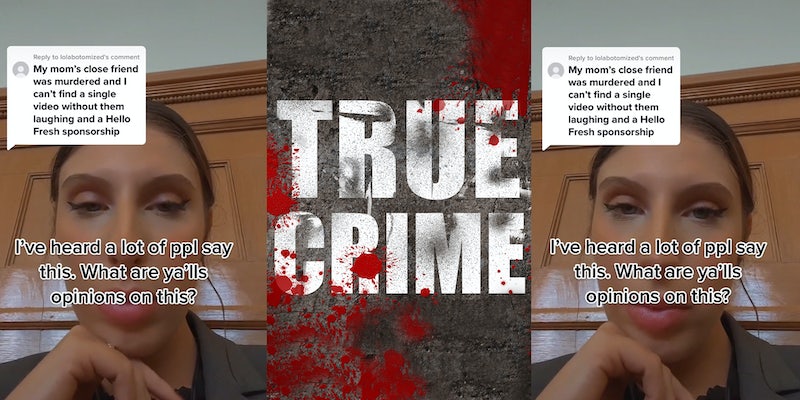 ‘I can’t find a single video without them laughing and a Hello Fresh sponsorship’: TikTok comment shows off the dark side of true crime

'I don’t think anyone should be able to profit from murder.'

In a viral video, TikToker Pamela (@themisspamelaj) asked for her follower’s opinions on true crime influencers and Youtubers capitalizing off of murder for content.

The video was in response to @lolobotomized who said, “my mom’s close friend was murdered and I can’t find a single video without them laughing and a Hello Fresh sponsorship.”

“I’ve heard a lot of people say this. What are ya’lls opinions on this?” Pamela asked in the video’s overlay text.

Pamela’s page is dedicated to victims of true crime and those who advocate for them. Her videos touch on sensitivity and respect for those who have lost their lives at the hands of murderers, serial killers, and others.

In the comments section, users share their opinions on ads and morbid jokes in true crime content creation.

“True crime should be a memorial for the victims, getting sponsorships feels so wrong. I don’t think anyone should be able to profit from murder,” one user said. Pamela agreed with them, arguing that “I understand sponsors to keep the vids going but I think some do it more respectfully than others.”

“Sponsors are a good way to fund the videos and charities. Although they may be insensitive, they are necessary sometimes to keep stories heard,” another commented.

“I’m a mortician and if I don’t laugh my days get very long. Imagine the toll talking about something so dark for so long could take on you,” a third user said.

The comment first appeared on a video Pamela shared that addressed respecting the families of victims.

“That’s why I made these videos. These families are on social media. They see your disrespect,” the overlay text said.

The first photo is a screenshot of a comment that reads, “I have a dead daughter and if I saw this about her I would vomit and immediately triggered into ideations.”

Pamela added some context and said “For those [wondering]. This comment was left under a video of someone saying that Madeleine McCann ‘didn’t exist.’ It was disrespectful” via a comment in the comments section.

“It’s because people stop seeing the victims as people. They forget about them. Some people don’t engage in true crime content because of empathy,” one user shared.

“As a forensics student, there is a respectable way to deliver the details of a case. a true crime TikToks lack it,” another commented.

“No cuz some of yall are SO disrespectful. Those are real people, families see that. You don’t get to just say ‘why he kinda fine’ when they took a life,” a third user said.

The Daily Dot reached out to Pamela via TikTok comment.