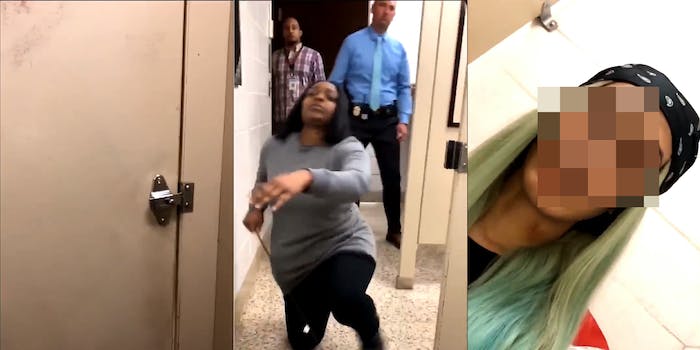 A woman broke into the stall, leaving the door open.

A transgender student at a Minnesota high school was harassed and exposed while using the bathroom, according a video posted on Twitter.

The minute-long video documents a young woman breaking into the stall the student is using, and leaving the door open as she stands with her back to the stall. At least two other men accompany her, one of whom appears to be hiding from the camera. In a later video, the student implies the three are school staff or hall monitors.

“Look at that,” the student is heard saying from behind the camera. “I’m using the bathroom right now and they just violated me.”

“I am so scared and violated right now,” she says. “They just walked in the bathroom while I was using the bathroom for no reason.”

The three people outside are heard trying to say something to the student, but are inaudible.

The video was originally shared by the student, who, because she is likely underage and can’t be reached for comment, we are not identifying. In a Facebook post, she named the school as Osseo Senior High School in Osseo. In a video taken in what appears to be shortly after the bathroom incident, she is in the school hallway, pointing out teachers and adminstrators who are lined up staring at her. One, she says, “is the dude that violated me.”

In another follow-up video at the police station, she says, “They got me fucked up. I can’t use the girls bathroom? I call myself a she and not a he, OK?”

“I had more videos than that. They been threatening me, they been saying ‘I don’t feel safe using the bathroom bc a man’s up in here,” she continued.

The videos were then signal-boosted across Twitter by many.

“I’m not personally in touch with the student, but in her video, she asked for people to share it far and wide,” Kenidra Woods, 18, told the Daily Dot. “So, I made it my priority to share it because it infuriated me to my core. No one should be treated in the manner she was treated.”

Bathroom access for trans people has been a part of a national debate in recent years, coming into focus largely after North Carolina voted in legislation preventing the state from enforcing anti-discrimination laws in 2016. A year later, President Trump revoked a Obama era law that protected trans students’ access to using bathrooms of their own choice.

However, the Osseo incident took place in a state among the few known for being LGBTQ friendly, and was the country’s first state to have civil rights law protecting transgender people from discrimination.

The Daily Dot reached out to Osseo Senior High School for comment. The principal did not respond, and the school said they cannot confirm if the incident took place. A representative from the Osseo Area Schools district did not respond to the Daily Dot’s request for inquiry as of this posting.

The school’s website says, “Our mission is to inspire and prepare all students with the confidence, courage and competence to achieve their dreams; contribute to community; and engage in a lifetime of learning.”

Editor’s note: This piece has been updated with more information about the incident.