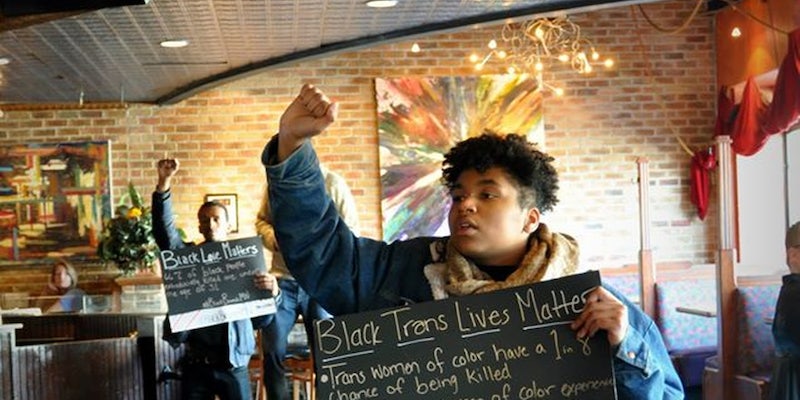 On March 30, a transgender woman named Mya Hall was killed outside the NSA. But no one is talking about her death.

Mya Hall wasn’t looking for trouble when she took a wrong turn on March 30 and wound up on the wrong exit of a Fort Meade, Md. parkway, which led to the Baltimore headquarters of the NSA.

But she still wound up dead after security opened fire on her vehicle, apparently causing it to crash into the gates of the compound.

This week, as protests over the death of Baltimore resident Freddie Gray continue, black women on Twitter are urging the city to remember her name. 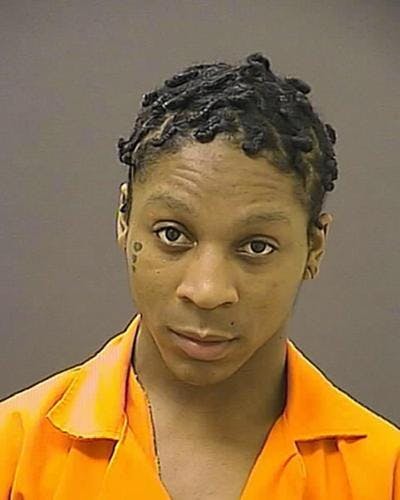 Hall, 27, and her friend, 20-year-old Brittany Fleming, crashed a stolen SUV into the gates of the NSA on March 30 after officials began shooting at their vehicle. Authorities stated that they began shooting because the pair did not initially stop proceeding toward the building when authorized to do so, instead accelerating towards a police vehicle. Hall was killed in the incident. Fleming was wounded.

Hall and Fleming reportedly went on their joy ride while in a drug-fueled haze after a party. “Driver killed at NSA had history of robbery, prostitution,” the Baltimore Sun headline read.  Hall was on probation and had an arrest warrant issued the day before she died.

Yet although a gun was found in the stolen SUV, Hall was unarmed at the time of her death. An FBI spokesperson stated after the incident that it was not connected to terrorism.

What’s more, wrong turns at that particular exit are an extremely frequent occurrence. Yet early reports from authorities described the incident as an attempt to “ram” the gates, and some media reports referred to events as a “gunfight.”

Initial reports of the incident that led to her death described Hall and Fleming as “men dressed as women,” “crossdressers,” “men in drag,” and “transvestites.” Hall was also frequently misgendered and typically referred to as a man, using her legal name.

The few media reports on Hall’s death have been tinged with transphobia, with a Washington Post article continuing to describe Hall and Fleming as “men dressed as women,” a revelation which it referred to as a “shocking twist.” The Post also described the street scene where Hall and Fleming worked as a “choreography of cliches,” focusing on the high heels, short shorts, and heavy makeup of the women.

In contrast to the outrage that the deaths of black men like Mike Brown, Eric Garner, and Gray have prompted on social media, there has been very little attention given to Hall’s death. As a black trans sex worker, she and Fleming have been written off as “troubled.” On Tumblr and Reddit, platforms that are usually supportive of transgender victims of violence and black victims of police brutality, Mya Hall’s name is notably absent.

But the Baltimore protests have renewed public concern over Hall’s death, as well as criticism of the lack of attention it received and the way the media has covered it.

Who else has the scene setting of their death described as a "choreography of cliches"? https://t.co/0Sta4kdH0D #MyaHall

If it wasn't for Twitter I may had never known about Mya Hall's murder and that is truly sad.

I'm trying to look more into Mya Hall's death and literally little to no media coverage about her story. I'm furious but not surprised.

Protest over Hall’s death comes a month after the indictment of a suspect in the death of Islan Nettles, a black trans woman, in 2013. It also comes just days after a ruling in the case of Dante Servin, a policeman who shot Rekia Boyd, an unarmed black woman, in 2012. Judge Dennis Porter ruled that Servin could not be found guilty of the offense he was charged with because he should have been charged with something harsher. The ruling left Boyd’s supporters without justice or recourse for a new trial, and social media has been busy urging petitions for the firing of Servin.

The names of Hall and Boyd have joined an ever-lengthening list of victims of police brutality. And while protests like those in Baltimore remind us that #BlackLivesMatter, the lives of fallen black women tend to matter less when it comes to summoning public outrage over their deaths.

While protests like those in Baltimore remind us that #BlackLivesMatter, the lives of fallen black women tend to matter less when it comes to summoning public outrage over their deaths.

“When black men are killed, slogans like “hands up, don’t shoot” or “I can’t breathe” echo across the country,” wrote Darnell Moore in Mic after Servin’s acquittal. “When black girls and women like Boyd are killed, there is comparative silence.”

When cis black people were asked why they cant feel the same outrage over Mya Hall’s death, they want to shout “Well, the CIRCUMSTANCES. Look at what she did!”

Suddenly the same argument we’ve been using (that the police can arrest and detain people without murdering them) to condemn police for cis black men’s deaths don’t apply to her?

I want to act like that confuses me but it doesn’t, I know exactly why.

Photo: transstudent: Remember when a trans woman of color from Baltimore was killed by police? Mya Hall, a… https://t.co/IMrLkrzJTg

Yet awareness of Hall’s death is growing. A post on Tumblr simply proclaiming Hall’s name has gotten 14,000 notes in under a day.

And as the protests continue, more women will be reminding us that the lives of black women, black transgender women, and sex workers matter just as much as those of the men who are frequently at the center of the media’s attention.