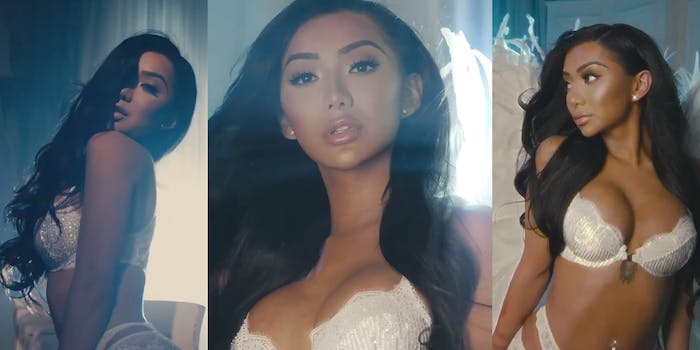 ‘Live your fantasy and don’t let anyone tell you otherwise,' she said to her fans.

In early November, the lingerie giant Victoria’s Secret found itself in the hot seat when chief marketing officer Ed Razek was asked in a Vogue interview if the company had considered hiring transgender models. He said while they had considered the possibility, they ultimately decided against it, explaining, “We market to who we sell to, and we don’t market to the whole world.”

When faced with backlash, he dug his hole even deeper, saying that he doesn’t think transgender women should be in the Victoria’s Secret fashion show, “Because the show is a fantasy. It’s a 42-minute entertainment special.”

Just under a month after Razek’s discriminatory comments, YouTuber Nikita Dragun is clapping back with a video that shows just how wrong he is about trans women. “dear Victoria’s Secret, you said trans women can’t sell the ‘fantasy’ so here i am as a TRANS WOMAN selling the FANTASY!” Dragun posted on Twitter on Wednesday.

dear Victoria’s Secret,
you said trans women can’t sell the “fantasy” so here i am as a TRANS WOMAN selling the FANTASY! 👼🏻 pic.twitter.com/rKQHp7SLNq

The video is styled after the company’s advertisements featuring Victoria’s Secret angels. Dragun wears various pieces of sparkling white lingerie, such as a cage bra and lace panties with hip cutouts. She even dons a pair of giant angel wings. Running her hands over the fabric, smiling coyly, throwing her hair back, and moving in slow-motion in white confetti, Dragun perfectly captures the essence of a holiday Victoria’s Secret commercial. Twitter is loving her answer to Victoria’s Secret, calling it the “most powerful clapback in the history of ever.”

i will never have any other fantasies other than this one

Not just satisfied with thoroughly disproving Razek’s discriminatory ideas, Dragun took the opportunity to offer her opinion on Victoria’s Secret in general, saying, “trust me sweetie there are plenty of higher quality / inclusive lingerie brands out there. that i would GLADLY spend my money on instead of VS.”