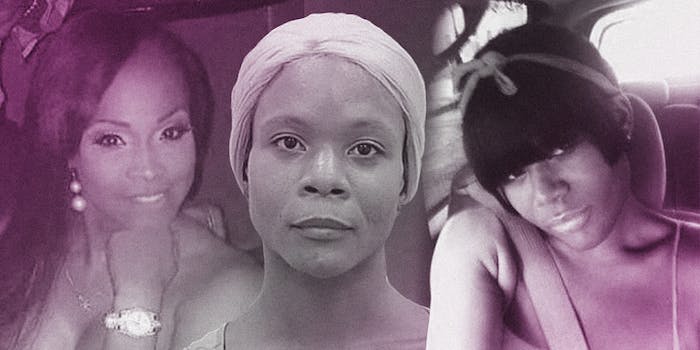 8 transgender women have been killed already this year—it's time we put that number into perspective.

Amid a surge in hate crimes across the U.S., eight transgender women have been murdered so far this year. Three of those trans women were found dead in Lousiana within a two-week period not long after President Trump removed bathroom guidelines protecting transgender kids in schools. Alphonza Watson, the most recent victim, was shot and killed in Baltimore on Wednesday morning. Her loved ones told the Baltimore Sun that the 28-year-old who worked in retail was “talkative” and a “fun person to be around.”

More than any other marginalized group, trans women are likely to be targeted for a hate crime. In 2016, at least 27 trans people were killed, a majority of whom were women of color.

These numbers might seem infinitesimal considering that the Census Bureau estimates that one person in the U.S. dies every 10 seconds. A handful of trans women is certainly a tragedy but might not seem like a cause for national concern.

That, however, is far from the case. To understand why this is such a massive problem, let’s put this year’s numbers into perspective, shall we?

Commonly cited statistics from abuse advocacy groups claim that internationally around 4,000 women die each year as a result of domestic violence. That seems like a lot because it is a lot, averaging around 11 women every single day. Widely circulated data from the Federal Bureau of Investigations shows that in the U.S., nearly twice as many women were killed by their husband or partner (11,700) as the number of soldiers who died during the Iraq War (6,500). Between the years of 2001 and 2012, that averaged about 1,070 each year.

Any reasonable person would deduce that this is a rampant problem absolutely deserving of our collective concern. But what would happen if we compared those already horrific statistics to the number of trans women who have been killed this year, even while doing something as ordinary as walking down the street or going to the grocery store? To juxtapose that data, we would first have to adjust for population size. The trans community, while vocal and vibrant, is extremely small. The most recent survey from the New York Times estimated that there were 1.4 million transgender people living in the U.S., which is a little larger than the population of New Hampshire. If half of that group is female, that leaves us with 700,000 people.

Meanwhile, the most recent Census estimate found that there are about 163.2 million women—whether trans or cisgender—in America.

Let’s say, for the exercise, that there were 163.2 million transgender women, and they faced the same rate of violence that they do now. To tabulate that number, we would have to multiply 8 (the number of trans women killed in 2017) by 163.2 million (the actual number of women overall). After that, anyone who has ever cross-multiplied knows what happens next: We take the resulting number (1.3 billion) and divide it by the number of trans women currently living in the U.S. (700,000). That number comes out to 1,865 deaths.

In a U.S. population of about 700,000 trans women, 8 killings in 3 months is a higher murder rate than the total number of women who die as a result of domestic violence on the entire planet.

That total is already greater than the aforementioned number of women who die as a result domestic violence in the U.S. every year (1,070), which is unconscionable for a lot of reasons. But remember: 2017 isn’t over. To really compare these two totals, we need to look at a full calendar year.

When Watson was brutally murdered, she died on the 12th week of the year—not quite three months into 2017. To adjust, we’ll have to use our eighth-grade math skills again. If you’re following along on your abacus at home, it’s easy: Divide 1,865 (the adjusted number of trans women who have died so far this year) by 12 (the number of weeks so far), and you come up with 155.41 deaths a week. From there, you multiply that number by 52 (the number of weeks in a year). You come up with 8,081 deaths.

That number is not only eight times larger than the already tragic number of American women killed by their partners each year. It’s also greater than the number of women who die annually as a result of domestic violence on the entire planet.

This appalling result speaks volumes about the myriad and overwhelming hardships the trans community faces. Transgender people, particularly women of color, are more likely to unemployed or live under the poverty line. They have the highest rates of HIV in the nation but are the least likely to have access to health care, which is due to widespread discrimination from medical professionals. This population is disproportionately likely to be beaten or abused by their partners, and nearly half report being survivors of sexual assault.

These are horrific statistics, and it doesn’t require access to a Texas Instruments calculator to figure that out. However, it’s unclear how many more murders it will take before law enforcement, the administration, and the nation at large will consider this an epidemic in dire need of address.