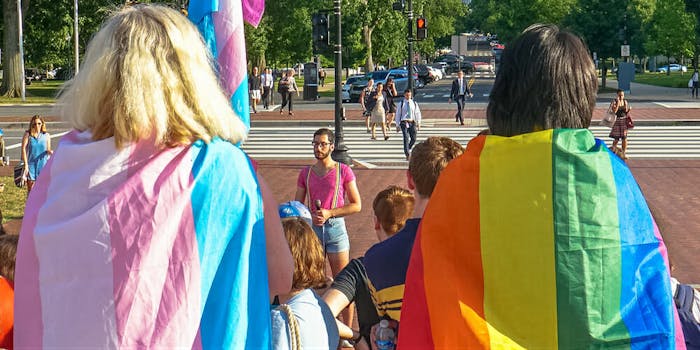 Why is a journalist who has misreported trans issues allowed to propagate more transphobia?

Let's leave the expertise to the professionals and those who are actually transgender.

Journalist Jesse Singal, noted for being extremely misguided on transgender issues and bad to trans people, is back at it again with a piece for the Atlantic that plays into largely unfounded fears about trans children.

From the get-go, Singal’s latest article sets off alarms for trans folks, with the title, “When children say they’re trans,” rather than “When children are trans,” immediately casting doubt on a child’s or teen’s ability to identify their gender. Singal’s article centers on a 13-year-old who came out to their parents as trans, but after being denied gender identity care and information for months, they eventually said they were not trans.

For many trans people, this reads like an all-too-familiar horror story. But the article frames what the parents did as rational in a world overcome by irrational transgender acceptance. People on Twitter were quick to point out the many failings of Singal’s article.

Jesse Singal & groups like Transgender Trend believe that there are hordes of children being forced to become trans – as though that is a 'bad outcome' – & this is factually untrue. The reality is that most trans kids struggle to access even basic support, let alone medical care.

Most troubling is the multitude of expert resources Singal references that encourage parents to accept their child’s identity and get them care, only to be dismissed with the example of a child who never even got the chance to be diagnosed with dysphoria because their parents withheld that care.

To promote the story, the Atlantic tweeted the question: If your kid says their trans, “what do you do?” Instead of letting Singal lead the discourse, the Daily Dot reached out to Kimberly Vered Shashoua, an LCSW from Vered Counseling who works with trans teens, for an answer. “I would advise them to see a therapist who specializes in working with trans youth,” she said. “Not because the child is obviously in need of therapeutic care, but because this is an important question.”

Shashoua explained why a specialized therapist is needed for trans children seeking physical transition, saying, “In terms of starting puberty blockers, hormones, and other medical transitions that Singal focused on, having a supporter—not a gatekeeper—can help the family make decisions on the best timeline for them. This can vary depending on a myriad of issues, including where the child is in exploring their gender identity and the family needing additional support through conflict.”

The exploration of gender identity—and its waiverings—are familiar to many trans and non-binary people, myself included. I remember asking my best friend when I was 12 years old if I looked like a boy, and crying when she said no. I buried those feelings, deciding I just wasn’t a “traditional girl.” In my adulthood, I came to identify as non-binary, and felt a weight I hadn’t recognized for all those years being lifted from my shoulders.

Gender is complicated. It can change over time, sometimes naturally, and sometimes due to pressure from others. This change does not make the identity invalid, as Singal’s piece implies.

“Children and teens need the safety to explore their identity—not just in terms of gender, but their likes and dislikes, aspirations, all of the stuff that separates them from their peers and all of the millions of other people in this world,” says Shashoua. “Gender isn’t some unknown scary force where the only form of experimentation is permanent surgery or hormones.”

Shashoua also emphasized the necessity of therapy not just for children in situations like the one Singal wrote about, but also for parents. “Parents need a safe space to be ambivalent, even resentful of their children,” she says. “It seems like despite the parents wanting to be ‘affirming,’ they are sending a clear message to their kid that being trans isn’t really OK. If these parents were able to have a space to say, ‘I just don’t feel like affirming my child,’ and work through their conflicted feelings, it’s more likely that they would have been able to help their child, instead of saying, ‘Figure it out on your own,’ and then taking away the means to figure it out.”

What’s also dangerous about Singal’s piece is that he, a man who is cisgender and has a history with misreporting trans issues, was he hired to write about this at all.

Why is anyone publishing what Jesse Singal says about trans people

The fact of the matter is, there are many trans journalists, and people who specialize in trans care, who can write about trans issues. They can interview families and children with empathy, knowing how difficult it can be to understand who you are. They won’t act like refusing to let a child see a qualified professional about their gender identity is “normal.” Most importantly, they can offer their own experience—experiences readers often don’t get to read about because writers like Singal are leading the conversation.