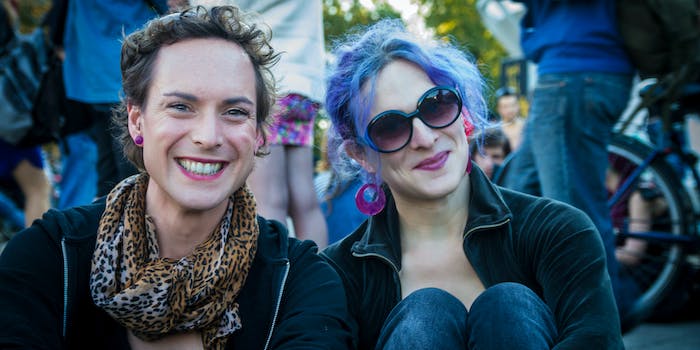 New York Magazine’s Jesse Singal’s views on transgender children have always sparked controversy, leaving Upworthy’s Parker Molloy to say he “doesn’t understand trans people.”  Now, Singal is facing new scrutiny after he admitted he misinterpreted data from a study on trans children that was key to a feature story he wrote from 2016.

In a Medium post on Tuesday, Singal said that a 2013 study from the Center of Expertise in Amsterdam was misread by both himself and other writers. In the study, the clinic followed up on 127 adolescent patients with gender dysphoria, a condition where a person’s gender identity is incongruent with their assigned sex at birth.

Among those 127 patients with gender dysphoria, 80 adolescents did not return to the center for treatment. Therefore, the study concluded that those 80 patients with gender dysphoria “desisted” and “no longer had a desire for gender reassignment.” In a July 2016 piece, Singal made that exact claim, saying the children “now identified as cisgender.” But that isn’t exactly true, and it’s led him to correct the error.

I done goofed. This is nerdy but I think it's important for those following this debate.

"Everyone, Myself Included, Has Been Misreading the Single Biggest Study on Childhood Gender Dysphoria Desistance and Persistence" https://t.co/OqKPaAHS2q

2/ This is such a good case study of Read The Fucking Article Closely Before You Write About It (RTFACBYWAI) — which I thought I did! But clearly not. I took at face value critiques made by people who are not careful about this stuff.

If you are a parent of a gender dysphoric kid you need accurate information about what's going to happen. Accurate information means
-some kids desist
-others don't
-kids should never be shamed
-conversion therapy doesn't work
-transition relieves serious dysphoria

Rather, within those 80 “desisters,” only 46 sent in a response directly, 12 did not respond, 12 were totally “untraceable,” four suggested their gender dysphoria “remitted” but didn’t participate in the study, and six refused to fill out their survey but allowed their parents to fill out their replies.

In other words, there were never 80 dysphoric kids who changed their minds and identified as cisgender. Rather, the study proves 80 children didn’t go back to the clinic for treatment. And even though some children wrote in, or their parents wrote in, that they don’t have dysphoria anymore, it doesn’t necessarily mean that they aren’t experiencing dysphoria.

When reached for comment by the Daily Dot, Singal provided a two-paragraph explanation on his views regarding gender dysphoria and desistance, which can be read here. While Singal stressed transgender and gender non-conforming kids must be able to express themselves in a “safe, nurturing environment,” he also believes studies and interviews with medical professionals give credence to desistance.

“My skepticism that desistance is a ‘myth’ or is something only relevant for the purposes of transphobic arguments has been bolstered by my conversations with gender-affirming clinicians who have acknowledged that desistance occurs,” Singal told the Daily Dot. “On the other hand, I empathize with the fears I often encounter about this concept being used for bad ends.”

The Daily Dot's doing a thing on the Twitter controversy surrounding my gender-dysphoria desistance post later. I asked them to run my statement in full given how complicated this is but I couldn't get it anywhere near short enough (my fault, not theirs).

So here it is: pic.twitter.com/NQ8RNwfruA

But Singal’s reporting and his explanation have since sparked a controversy of their own. For one, trans activists warn focusing too heavily on desistance encourages people to take gender dysphoria in children less seriously. Many trans people fear extensive reporting on desistance that doesn’t include input from transgender people who experienced gender dysphoria in childhood can cause harm to trans children because it prevents dysphoric kids from receiving treatment.

Even if you think most kids who express gender dysphoria will eventually “desist”, wouldn’t you WANT them to have access to blockers so that they have time to come to that realization and not forever wonder if the only made their choice because puberty was inevitable?

Others argue that Singal’s larger body of trans coverage has problems. Many point to his flattering take on the immensely controversial Dr. Kenneth Zucker, an American-Canadian sexologist who argued for “curing” signs of gender dysphoria in certain children. Trans activists previously equated Zucker’s theories to “conversion therapy,” CBC News reports.

Most of all, desistance is complicated, and more studies are required to make firm conclusions on gender dysphoria in children. So activists think Singal should tread lightly moving forward and put trans voices first.

EVERYONE, MYSELF INCLUDED (and not including probably 90% of trans people, most of whom have told me that I'm wrong and got mocked & blocked for it) HAS BEEN MISREADING THE SINGLE BIGGEST STUDY ON CHILDHOOD GENDER DYSPHORIA DESISTANCE AND PERSISTENCE

Gender dysphoria remains complex, and for many Americans, trans rights raise more questions than answers about gender identity. But when it comes to understanding gender, activists have a unified message: Transgender people should take the lead, lest studies end up enabling transphobia in the doctor’s office.