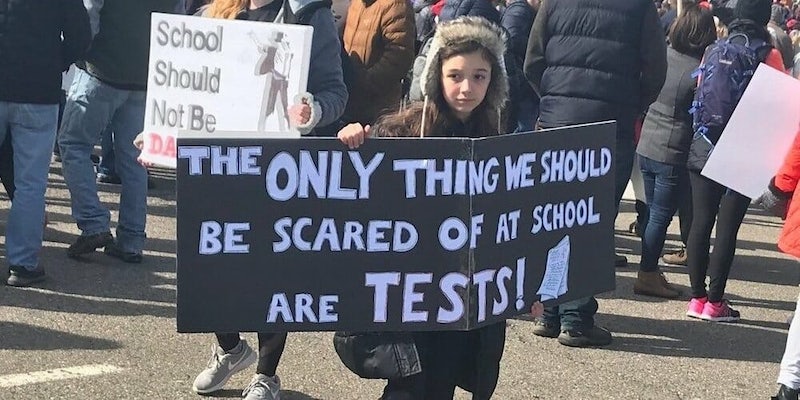 'The only thing we should be scared of at school are tests.'

As hundreds of thousands of protesters flood city streets around the country for the March For Our Lives, a common thread emerges: These people make damn good signs.

CNN’s Brian Stelter tweeted that one of the most common signs at the march was a call for politicians and apathetic onlookers to replace their hollow “thoughts and prayers” with a genuine effort to effect change.

This is one of the most common signs at the NYC march (which is still going on, and on, and on) pic.twitter.com/fkt3VtpFma

Other students implored politicians to care more about their own lives than the money they could get from the NRA.

Some protesters lightened the mood with a bit of cheeky (pun intended) wordplay.

In the past month-and-a-half, the Parkland shooting survivors have had to grow up incredibly fast in the public eye. But several young protesters made it clear that they shouldn’t have to fear for their lives at school every day.

Listen to the kids will you! pic.twitter.com/JbBJyD8ERf

Marjory Stoneman Douglas High School junior Samantha Mayor marched alongside her mom. Mayor was shot in the knee during the school attack on Feb. 14, and she sported a leg brace during the march. Mayor protested because she almost couldn’t; her mother protested because no parent should ever have to face the horror of knowing their child is in mortal danger.

Stoneman Douglas junior Samantha Mayor, 17, was shot in the knee during shooting rampage on Feb. 14. Here she is with mom Ellyn at #MarchForOurLives in Parkland. pic.twitter.com/Co67wSRC9c

The Parkland shooting survivors have won the sympathy and support of millions of people across the country. But one protester pointed out that you don’t even need to like kids to support their safety.

Other protesters encouraged gun control advocates to speak with their votes.

The kids are ready to march AND vote. #marchforourlives #neveragain #WeCallBS pic.twitter.com/FoncblcBL6

Here are a few other of the best signs that were seen.

One of the best signs. #MarchForOurLives pic.twitter.com/6z2bkmPDip

The teens are really good at the signs pic.twitter.com/c2m3QI98uh

Teens are counting down the days until they can vote at the #MarchForOurLives in Parkland, FL. There’s a push to register voters at the rally. pic.twitter.com/DAHtCz1Lee

Protesters both young and old have turned the March For Our Lives into a massive nationwide movement. Signs like these only add to their visibility and momentum.