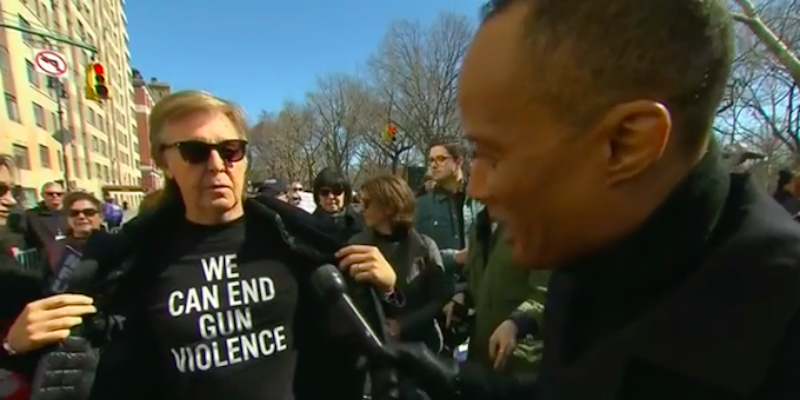 Paul McCartney joins the March For Our Lives, and he had a very powerful reason to do so

Numerous celebrities attended the March For Our Lives in Washington D.C., New York City, and other locations around the country on Saturday, including Paul McCartney, who had an especially powerful reason for pledging his support for gun safety.

McCartney, wearing a shirt that said “WE CAN END GUN VIOLENCE,” spoke to CNN about why it was important for him to join thousands of protesters in New York City. When asked what he thought could be accomplished “at a legislative level,” the musician admitted, “You know, I’m like everyone. I don’t know. But this is what we can do, so I’m here to do it.”

He became visibly emotional before adding, “One of my best friends was killed by gun violence right around here.” He was referring, of course, to his former Beatle bandmate and childhood friend John Lennon, who was shot dead by Mark David Chapman outside The Dakota apartment building in Manhattan on Dec. 8, 1980. He was 40 years old.

Paul McCartney is marching in Central Park. “One of my best friends was killed by gun violence right around here.” #imagine

Kim Kardashian and Kanye West also flew to Washington with their oldest daughter, North West, to participate in the March. “We stand in solidarity with the survivors of gun violence & students who are calling for action on common sense gun safety,” Kardashian tweeted Saturday morning.

So ready to March today! Landed in DC w North & Kanye. We stand in solidarity with the survivors of gun violence & students who are calling for action on common sense gun safety laws at #MarchForOurLives around the country @AMarch4OurLives @Everytown

Meanwhile, actress and pop singer Zendaya and L.A. Lakers president Jeanie Buss marched in Los Angeles. Buss tweeted a video of protesters crowding the streets around Manhattan Beach, flashing a variety of signs with phrases such as “Never Again” and “Enough Is Enough.”