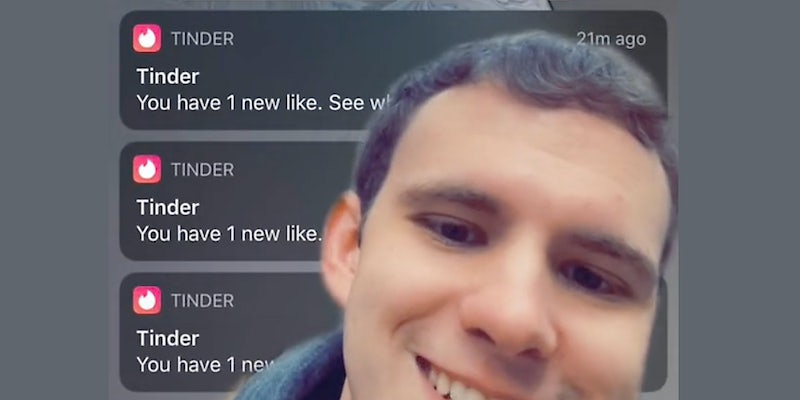 'This kind of feels in poor taste, man.'

A Twitch streamer and TikToker is receiving backlash for claiming that he changed his location on Tinder to Ukraine to match with “hotties that need a green card” amid rapidly escalating tensions between Ukraine and Russia.

TikToker @justpadetwitch made the claim in a viral TikTok video, which has over 2 million views and was posted on Feb. 21. The video is set to DJ Khaled’s “Major Bag Alert,” a sound that has birthed the trend of TikTokers using it to denote times when they stumbled upon unexpected opportunities.

Russia invaded Ukraine Thursday morning after months of acutely rising conflict between the two countries. CNN reported that Ukrainian cities Kyiv and Odessa were struck, and, according to NBC news, the attacks were carried out by 75 Russian military aircrafts and included “more than 100 ballistic missiles.”

Russian President Vladimir Putin justified the attack on Ukraine as a way to defend Russian-speaking Ukrainians in two formerly Ukrainian republics, according to USA Today. Ukraine’s foreign ministry said the attack is to “destroy the state of Ukraine, a Westward-looking democracy intent on moving out of Moscow’s orbit,” as reported by USA Today.

“In a televised address as the attack began, Russian President Vladimir Putin warned other countries that any attempt to interfere would ‘lead to consequences you have never seen in history,'” USA Today reported.

Some commenters found @justpadetwitch’s video to be in “poor taste” given the gravity of Russia’s military aggression.

“Do u actually think [u] should be joking about stuff like that ?” @nahnele questioned.

Around the same time Russia officially invaded Ukraine on Feb. 24, @justpadetwitch commented on the video acknowledging that it “didn’t age well.”

“Much love to the people in the affected areas,” @justpadetwitch commented. “These are just jokes but I would love peace.”

The TikToker isn’t the only one who has made light of Ukraine during its conflict with Russia: The country’s official Twitter account joked that it had a headache from existing next to Russia, and even asked Twitter users to tweet at Russia’s official account telling the country what they “think about them” shortly after the invasion began.

The Daily Dot has reached out to @justpadetwitch via Instagram direct message.