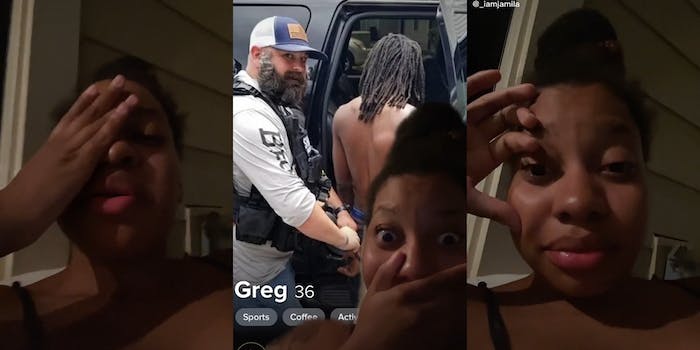 'Red flag all over.'

A TikToker says that she discovered a white man’s Tinder profile that shows him arresting a Black man while wearing a bulletproof vest and leading him into a car.

Jamila Bell (@_iamjamila) posted the TikTok showing the man’s Tinder profile on Thursday. The video shows the 36-year-old man, who is white and named Greg, looking at the camera while wearing a bulletproof vest and American flag baseball hat. He holds the handcuffs of a Black man he is escorting into a vehicle.

“I’m literally shaking,” Bell says in the TikTok. “Why the fuck would he post this?”

In an email to the Daily Dot, a spokesperson for Tinder said that they were unable to locate Greg’s profile by searching for the photo, so he may have removed the image.

“We encourage users to report any behavior that does not fall in line with our Community Guidelines directly to our Customer Service team in the app,” the spokesperson said.

“Who took that picture? Did he ask them like ‘hold on get this for me real quick,'” @menacedessidc commented.

“What in the Plantation is going on here?” @youknow_t wrote.

Others said that Greg’s profile picture implied that he supports police violence against Black people.

“Greg looked through his camera roll for the best reflection of who he is as a person,” @sebbiesss wrote.

“They be proud af, unashamed,” @dnajwa.davielleee commented. “They love it.”

“Its a clear message to HIS people and his type of woman,” @pilarnole_ commented.

The Daily Dot reached out to Bell and Tinder via email.