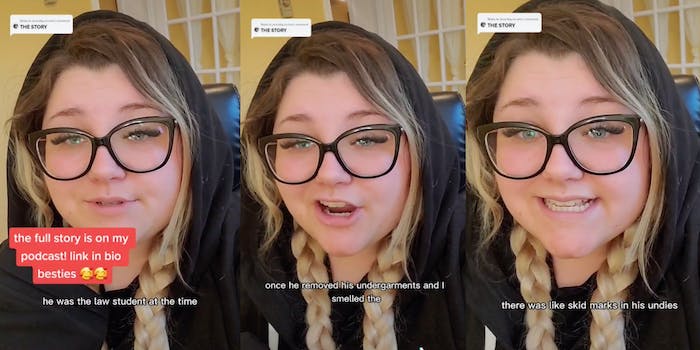 ‘He paid someone to serve me papers’: TikToker says she was sued by a Tinder date for ‘not hooking up’

He also allegedly served her a cease and desist for sharing the story.

A TikTok user is going viral for claims that a former Tinder date sued her for “breaking a verbal contract” after she refused to hook up with him.

The user, Emily or @your.big.sis.emi, claims that when she met Chad—the name of the Tinder date—he was a law student. While it was “implied,” they would hook up, she never said anything verbatim.

But she ultimately decided against anything physical once she smelled an odor coming from him.

“Once he removed his undergarments … I smelled the smell and saw the sight,” she said in a video with over 230,000 views. “There were skid marks in his undies and he had not washed in a long time.”

Soon after this revelation, she claims she left his place and he sued her a few days later. She apparently ended up getting out of the lawsuit by confronting Chad’s father—who is also a lawyer. But that wasn’t the end of her journey with Chad.

Emily originally shared this story on her podcast Been There Bestie and shared a teaser of the episode to her 40,000 TikTok followers. A few days later, she claims she was served with more papers (and reveals a cease and desist document in a follow-up video).

After speaking to a lawyer, she said that Chad didn’t have much of a case since nobody could “tell who he is.”

“Also, is it slander if it’s true?” she quipped at the end of her video

It’s unclear if Chad has pursued any further legal action. The Daily Dot reached out to Emily for comment.