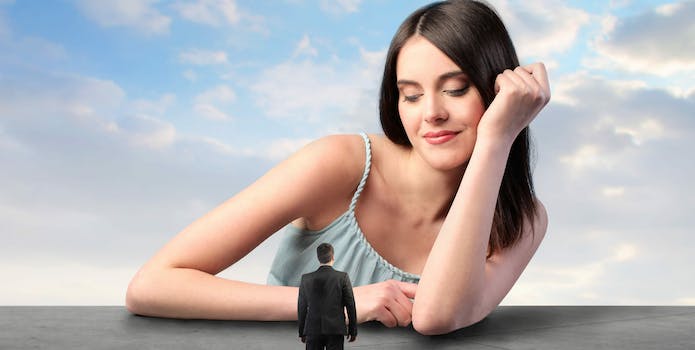 I was banned from Tinder for posing as a murderous giantess

Why can't a woman write a bio to scare off predators?

This year, I was banned by Tinder for pretending to be a murderous giantess to get dates. The worst part? It was going great.

I was having a hard time in February. After being soft ghosted by an old high school friend, I was in dire need of affirmation from internet strangers that I was: (a) deserving of prompt responses to my text messages and (b) at least ranked “average” on the fun good time meter. So I did what most thirsty and attention-starved youth do.

I signed up for Tinder.

I had never done the online dating thing before and choosing a few flattering but realistic pictures was nerve-wracking. However, it was filling out my bio that made me really existentially suffer. Who was I? Everything I typed spun me out in a tornado of self-loathing.

“I have a BFA and have been looking for a job with health insurance for 10 years. I spend most of my time in my home, watching re-runs of ‘The Office’ and lint-rolling cat hair off my collection of enormous shapeless black dresses. Just kidding, I don’t own a lint-roller. I am a Cathy cartoon.”

If I was disgusted by my life status, what hope did I have for anyone on Tinder to find me even 1 percent alluring? What if I found that I was the real problem, that my personality was odious and unforgivable, that I am simply a human swipe left in all scenarios?

So I wrote the following bio:

“I am filled with aggression and murderous rage. I need to crush you beneath my extremely high heels. I am not holding any babies in photographs because children scream and cry when they gaze upon me. I am terrifying. I am 6’11.””

There. If I was rejected by everyone on Tinder then, by God, it wouldn’t be for who I really was. It would be for the way I looked, or for claiming to scare small children. And besides the bio was, in a strange way, exactly what I wanted to express about myself to internet strangers I’d potentially meet alone in public: Do not fuck with me. I am feisty and I never leave drinks unattended. All my friends know where I am. I will not be killed by an internet predator without doing some serious damage to them first.

To my surprise, my jokey, aggressive profile was a runaway success. It somehow lured a ton of people who both shared my rather dark sense of humor and magically had a lot in common with my real, private non-giantess personality. My bio provided a unique entry point for conversation so my matches and I could effectively steer clear of boring “What do you do?” dead-ends, and instead have the kind of fun, playful conversations I’d actually want to have. Even if it wasn’t a romantic connection, it was encouraging to find so many people who were smart, funny, and easy to spend a few hours trading stories with.

Not that my method didn’t have its flaws. I was messaging an interesting guy for two weeks before I realized that he liked my fake murdering giantess personality a little too much. I had forgotten that there’s a kink for everything and had inadvertently made a pretty tempting profile for the Tindering macrophiles (those who are aroused by being dominated, abused, or even eaten by a much larger woman). I realized this only when I started to receive what can only be described as “fan art” and I couldn’t persuade him to engage with me, Real Person Bailey, who is not super interested in crushing men with my enormous feet.

Still, we didn’t end things right away. For a few weeks, he would contact me via Instagram messenger when he wanted to feel small, and I would relieve some of my internalized misandry by calling him a pathetic little tiny man, and everyone would feel better. Being simultaneously feared and unconditionally desired was a powerful feeling, and the terms of our engagement, that I was to do or say whatever I pleased, made me consider for the first time what I actually wanted. I didn’t want to wait around to be chosen by some internet stranger—I wanted to do the choosing.

Eventually, what I wanted in this immediate situation, though, was to not continue berating my poor giantess-lover (turns out threatening to crush someone can be a bit repetitive!). It began to feel somewhat like sex work, so I sent him a Venmo request for $100, which he denied. We ended things amicably.

Regardless, I was having an incredible time going on a mix of amazing and terrible dates and sending Attack of the 50 Foot Woman gifs to matches I had a crush on. I was confident, in charge, and certain that I could find someone who genuinely liked me and my real personality and who (more importantly) I liked back.

Then Tinder banned me.

I woke up one morning in late April and couldn’t sign in. Error A:40303. I contacted Tinder and received the devastating news that I had been permanently banned for violating terms of service. Because I am not in the business of calling people racist slurs, using inappropriate and/or creepy pickup lines, or even soliciting money (at least not successfully), I was initially a little confused. I emailed Tinder asking to confirm why I had been banned. They never responded to my email or my 14 subsequent emails. I then created a Twitter account exclusively to reach out to Tinder, but they didn’t respond to any of my tweets so I can only assume, and probably rightfully, that I was banned for my bio. And I have a problem with that.

I understand the need for protocol to prevent online harassment. I understand that threats should absolutely be bannable offenses. I even understand how someone might have come across my profile and been rubbed the wrong way. What I don’t understand is how an app that is a well-documented breeding ground for terrible, misogynist pick-up lines and straight up harassment categorizes my joke in the same banning category as dick pics and hate speech. It feels sexist to deny me the right to act preemptively and be as aggressive as I want against the onslaught of offensive and just plain dumb messages it seems cis men are spiritually compelled to send.

Plus, my bio worked! I was meeting people and going on dates. I was connecting with people I was interested in connecting with. I remain one of the only women I know who actively enjoys using Tinder. I never received any negative feedback from my matches—in fact, several even testified on my behalf. However, when I sent screenshots of their responses to Tinder Support, I also got no response.

Much has been written about people being banned on the app (Tinder was called out for allegedly banning trans people in 2015, and a group of women campaigning for Bernie was banned last year), but there’s next to no official public information on ban statistics. There’s also, notably, no stance or information on kinks as advertised on Tinder. Sure, macrophilia didn’t end up being my particular cup of tea but what if it was? Would it be fair for Tinder to ban me for searching for someone to crush if that was my kink? Isn’t that just good old-fashioned kink-shaming?

I miss Tinder. I miss swiping, I miss the excitement, I miss conducting conversations as a giantess-type deity who is too terrifying to behold. I’d log back on in a heartbeat if they’d let me. Many times I’ve Googled “how to appeal a ban on Tinder” and found no real information but forums upon forums on Reddit of both the rightfully and unjustly banned asking, “Why? Why? Why me?”

I know why me, but I strongly disagree. I am a good Tinder user. I know because I’m still dating someone I met on Tinder, someone who decided to swipe right on a deranged, furious giantess. It’s even getting rather serious in spite of my ability to use his skull as an armrest. I’d submit us to Tinder success stories but for some reason, I don’t think they’ll get back to me.