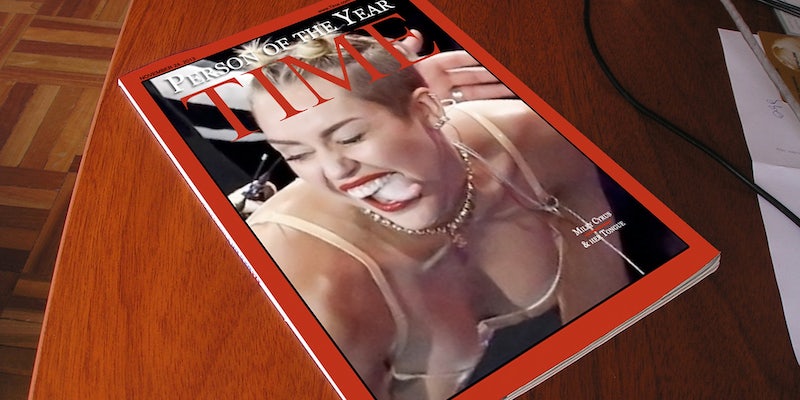 Rigging Time’s Person of the Year poll? All in a day’s twerk

Voting for Time's Person of the Year poll runs for another full week, but it looks like we may already have a winner.

When I heard that Time magazine was running another online voting component with its prestigious Person of the Year poll, the first thing I thought was, “Not again.”

Didn’t the news magazine learn anything in 2009, the year the notorious imageboard community 4chan had its founder Christopher “moot” Poole win the top spot? Or in 2012, when a small group of programmers created some software to have North Korean President Kim Jong-un win?

After watching last year’s public online poll get more than just rigged—the programmers also had the first letter of each of the nominees’ names spell out “KJU GAS CHAMBERS”—the magazine switched from using Polldaddy to Poptip.

At first glance, the move seemed to solve many of Time’s problems. It required voters to log in to the site with their Twitter or Facebook account first before casting a vote. But I messaged a programmer named Gains whom I had met during last year’s voting ordeal. I wanted to know what he thought of the new polling platform.

An hour after sending him a link to Time, he had found a way to crack the system.

“We think we could of found a way, now that we’re investigating it further, in depth,” Gains told me. “I guess the biggest lesson I learned today is that even if it looks ‘un-riggable’ doesn’t mean it is. Just in the hour or so that we’ve been talking, I created a prototype and ultimately ‘beat the system.’”

By Monday evening, Gains and his programming partner Marek had decided on the celebrity they wanted to win Time’s Person of the Year 2013: singer Miley Cyrus.

This is how they’re going to make sure she twerks her way to the top.

It was about 9:30pm Monday and Gains and Marek were already pounding away at their keyboards. Coding in C# (Gains) and Ruby (Marek), each of them was working on a script, a piece of software that automated the process of casting votes by working around Twitter and Facebook’s authentication. By plugging a person’s Facebook ID number (which is public) into their scripts, the duo discovered a sizeable loophole in Poptip’s service: They could vote on behalf of that person without them knowing. (The following screengrabs of the script in action were provided to the Daily Dot by Marek and Gains.)

As the two shared code back in forth on Skype, I was a digital fly on the wall, trying to keep track of everything. Around 10:30pm, the conversation turned to the subject of who they wanted to win. Gains had suggested Dzhokhar and Tamerlan Tsarnaev, the two brothers accused of bombing the Boston Marathon this spring. Marek suggested Cyrus, the perfect mix of controversy and lulz.

Cyrus has spent the last six months as the most tweeted, criticized, and sexualized celebrity on the planet. Her transformation from cute Disney TV star to adulthood was solidified in June when Cyrus released the music video for “We Can’t Stop.” In it, Cyrus can be seen twerking, writhing around in a skin-tight bodysuit, and sticking her tongue out. Cyrus followed up her video with a live performance of the song at MTV’s Video Music Awards in which she twerked in an ill-fitting, mouse-eared ensemble and flesh-colored bikini with crooner Robin Thicke and a bevy of giant teddy bears. In September, Cyrus dropped her single “Wrecking Ball” along with a music video featuring her sitting nude atop a, well, wrecking ball. Like “We Can’t Stop,” “Wrecking Ball” was a viral hit, collecting parodies and covers featuring Nicolas Cage, a BBC radio presenter, and a blind Filipino student.

The decision was made: Cyrus. At about 10:45pm, Cyrus hovered around 15th place, right above the Tsarnaev brothers. At 12:40am, she was in fifth, just half a percentage point behind Texas state Sen. Wendy Davis, famous for her 13-hour filibuster attempt in June to prevent a vote on a controversial Texas bill that would close hundreds of abortion (SB 5) clinics around the state. Sitting above Davis was the duo’s stiffest competition, National Security Agency (NSA) whistleblower Edward Snowden, the preeminent choice of the 4chan community and the Anonymous hacktivist collective.

“Oh no, I want Miley to win,” Marek said in response to a tweet from @youranonnews calling for its 1.1 million Twitter followers to vote for Snowden.

The tweet was punctuated by two different threads on 4chan’s random imageboard /b/ and two on /g/, its technology board, calling for anyone to develop a script to have Snowden win. This was another suggestion /b/ had on how to get Snowden to the top:

“I don’t think /b/ has a chance to make what they want to do a reality,” Gains said. “Whenever, if ever, they figure out how to do what my program does, Miley should be number one, which they’ll have to recover from. This is just another edgy attempt by /b/ to be more infamous. /b/’s losing its touch.”

By 1am Gains had worked threading into his script. In the first version of his program, without threading, votes would only be cast one after another. With multiple threads, 10 votes could be cast at the same exact time. A thread could be described as a “worker.” In other words, if there are 10 threads, there are 10 workers casting votes all at the same time.

At 3am today, Cyrus had moved into fourth place behind Sen. Rand Paul of Kentucky. Snowden was in first place.

As was the case in 2009 and 2012, Time editors will ultimately decide who wins, despite what the public poll says. But that didn’t stop these programmers from having a lasting impact.

In April 2009, as a way to pay tribute to Poole and have some fun at the expense of one of the most respected media organizations in the country, 4chan decided to game Time’s annual Time 100 poll.

Not only did they push Poole to the top of the list,  they also rigged the rest of the poll, spelling out the phrase “Marblecake, also the game” with the first letter from the first name of each contender.

“The 21-year-old college student and founder of the online community 4chan.org, whose real name is Christopher Poole, received 16,794,368 votes and an average influence rating of 90 (out of a possible 100) to handily beat the likes of Barack Obama, Vladimir Putin, and Oprah Winfrey,” Time reported, after awarding Poole the top spot despite /b/’s tomfoolery.

The publicity turned Poole into a mainstream tech celebrity. In 2010 he spoke at the TED conference, and over the next year he raised $3 million in venture capital to start Canvas, a safe-for-work community where users can remix images in exchange for colorful stickers.

Last fall, /b/ tried to make polling magic once again.

Time launched its prestigious 2012 poll a year ago today. Egyptian President Mohamed Morsi quickly rose to the top—with Kim Jong-un in a close second—thanks to a Java script that automated the voting process on Polldaddy.

“At the time, it was all about trying to get above Morsi,” script creator _js5 told me then.

About two days later, the task was complete. Kim had collected 2.9 million votes, at a rate of 6,000 every 10 minutes, thanks to about 100 people who all ran the script at once.

These 100 people had also spelled “KJU GAS CHAMBERS” by voting candidates such as Secretary of State Hillary Clinton and New Jersey Gov. Chris Christie to the top of Time’s poll.

While the phrase indirectly references the barbaric conditions at North Korea’s prisons, “KJU GAS CHAMBERS” was just supposed to be funny and not necessarily related to the penal labor colonies, _js5 said.

“There really is nothing too exciting about the meaning, sorry to say,” one anonymous IRC user wrote in an email to the Daily Dot and other media organizations. “We chose it because it was clever, had semi-subtle offensive overtones, and wasn’t as childish as our second choice of KFCBUTTSEX. Furthermore, if there was any overt justification for why we chose gas chambers, it’s because we wanted to reference Hitler, who’s [sic] gas chamber antics are always offensive to people. His name was mentioned a lot when we were discussing what to spell.”

On Dec. 19, President Barack Obama was crowned Time‘s actual Person of the Year. But that didn’t stop Korean Central News Agency from calling the race in Kim’s favor.

“Dear God the enemies 5.6 million people by ballot boxes from the lord of the most votes by o’clock,” read the article, according to a rough translation from Babylon.

If Cyrus ends up winning this year’s poll, do you think Time will honor her with the cover? Or will they be too busy trying to figure out how to strengthen their voting platform against vote-rigging in time for 2014?