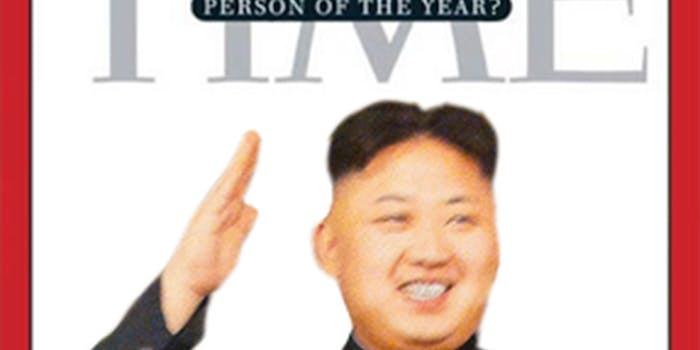 “KJUGASCHAMBERS”: How hackers stole Person of the Year poll

A group of IRC users installed Kim Jong-un as Time Magazine's No. 1 vote, but they also spelled a message with the first letter of each candidate's name.

Voting North Korean leader Kim Jong-un as Time Magazine’s Person of the Year was just the beginning. Now a group of Internet Relay Chat (IRC) users have manipulated the public poll to spell a message with the first letter of each candidate’s name.

While the phrase indirectly references the barbaric conditions at North Korea’s prisons, “KJU GAS CHAMBERS” was just supposed to be funny and not related to the penal labor colonies, _js5 told the Daily Dot.

Time Magazine launched its prestigious poll on Nov. 26. Egyptian President Mohamed Morsi quickly rose to the top—with Kim in a close second—thanks to a Java script that automated the voting process on Polldaddy, the survey site powering Time’s poll.

“At the time, it was all about trying to get above Morsi,” _js5 said.

About two days later, the task was complete. Kim had collected 2.9 million votes, at a rate of 6,000 every 10 minutes, due to the efforts of 100 people who all ran the script simultaneously.

The gaming of the poll also attracted attention on 4chan, where users dubbed Kim their “glorious leader.”

Kim is currently ahead in the poll, with 5.2 million votes. Comedian Jon Stewart is a distant second, with 1.9 million. 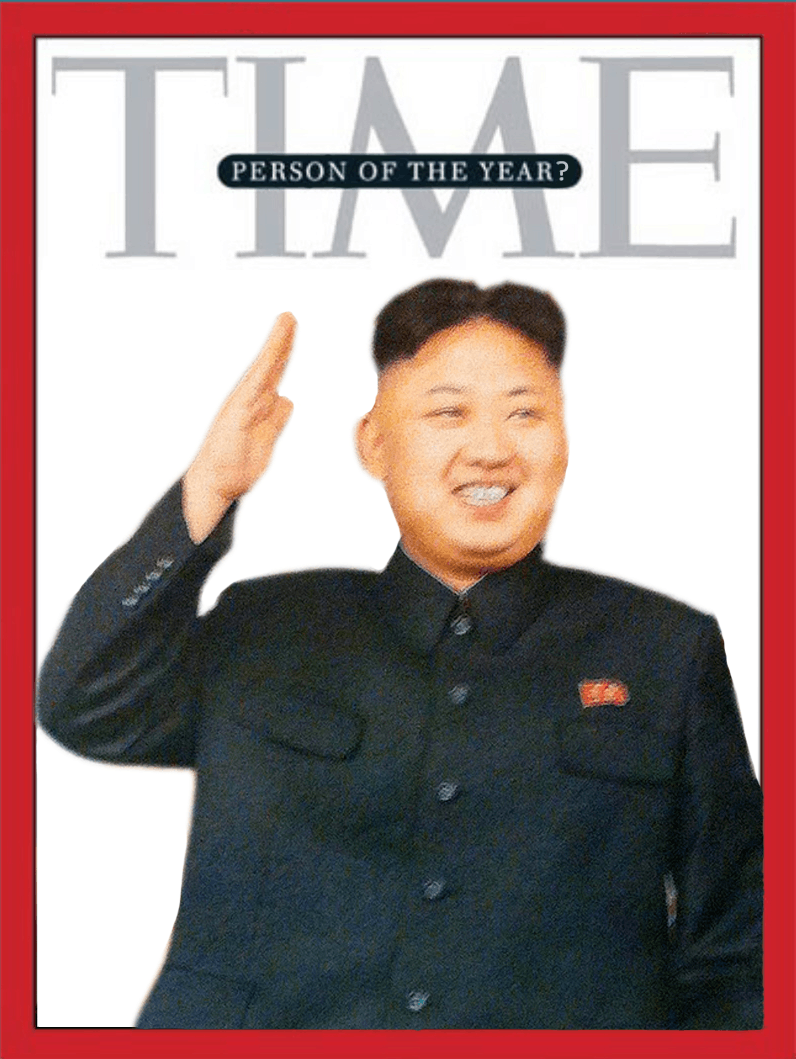 Yet while Kim has a dominant lead, he will likely not win Time’s coveted cover.

“As always, TIME‘s editors will choose the Person of the Year (issue date December 31, 2012, on sale December 21),” says the magazine on its public poll.

In 2009, 4chan pulled off a similar feat when users voted the site’s creator, Christopher “moot” Poole, as Time’s Person of the Year. The 4chan users also spelled out “marblecake also the game,” a reference to “the name of the IRC channel used during Project Chanology raids [on Scientologist websites], by arranging the first 21 nominees’ names in a particular order,” KnowYourMeme reported.

Since then, 4chan has gamed public votes for a new Mountain Dew flavor (one popular entry: “Hitler did nothing wrong”) and a competition to have Taylor Swift perform at a school for free.

The school 4chan decided to back was Boston’s Horace Mann School for the Deaf and Hard of Hearing, one of the oldest public schools of its kind in the county. The school was ultimately disqualified due to the way it received votes, but still received some pretty sweet prizes.

Swift herself made a personal donation to the school of $10,000, which was matched by the sponsors, as well as American Greetings and Cover Girl. VH1’s Save the Music program donated a fifth $10,000 gift in order to buy musical instruments for Horace Mann students.

The people’s choice for Time Magazine’s Person of the Year will be announced on Dec. 14. If Kim does indeed win, it would be a surprise to _js5.

“People think it’s a huge coalition of people running this. It’s only a few people, honestly. And I don’t know why Time keeps running the damn poll where there’s no captcha [a computer program that creates tests that humans can pass but computer programs cannot] and it makes it easy for this thing to happen,” _js5 said. “Maybe it’s just for the press, I don’t know.”