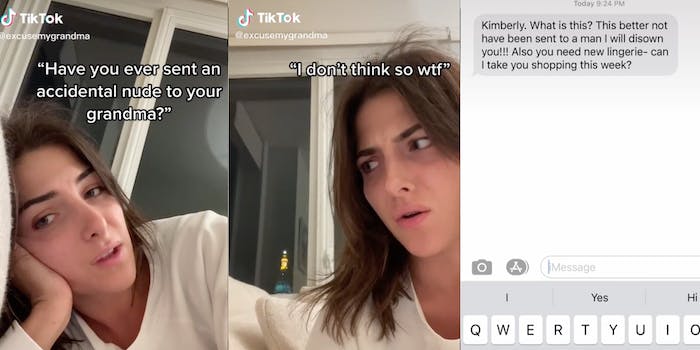 When in a rush, texting can get so confusing. But sometimes, it’s really important to pay attention to who you’re talking to.

A TikToker named Kimberly, who runs the account @excusemygrandma, learned this lesson the hard way after accidentally sending a lewd photo to her grandmother. Thankfully for Kimberly, her grandma had the best reaction.

“You need new lingerie,” she said before offering to to take her granddaughter out lingerie shopping.

However, she did jokingly warn that if the photos were sent to a man, she might disown her.

Kimberly and her grandma Gail co-host a podcast, Excuse my Grandma, on which the two discuss generational differences, dating, sex, and relationships through the lens of their own special relationship.

Commenters loved Gail’s reaction to her granddaughter’s nude, with one saying that it reminded them of how their own grandmother would respond.

“That’s weirdly similar to what my gram would have said,” user Amy Monk wrote. “Except she would say, ‘you look too thin. Come eat something’ even tho I am obsessed.”

Gail stars in many of Kimberly’s other TikTok videos. In another video, Kimberly jokes that a hypothetical man may be talking to someone who is prettier than her but that it’s his loss because no one will ever have a cooler grandma than her.

Update 1:55pm CT, June 22: When reached for comment, Kimberly told the Daily Dot she started the podcast with her grandma during the pandemic when they were living together. “It’s been really fun watching it grow and getting to speak to our guests, and we have some great episodes coming up that I know my fellow Bachelor Nation watchers will enjoy. I’m glad my TikTok followers like her humor as well,” she said.

She also confirmed with the Daily Dot that “no, we have not gone lingerie shopping yet!”

This story has been corrected to reflect the correct spelling of Kimberly’s name.