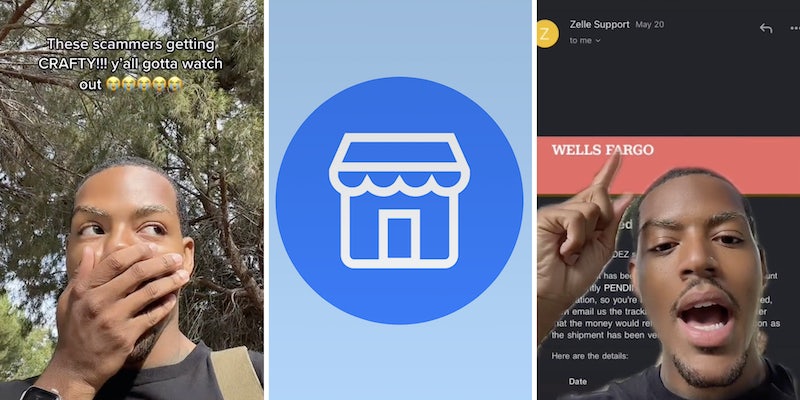 ‘How are you falling for this in 2022’: Facebook Marketplace scammer fooled a TikToker with a fake Zelle email

Private sales applications like Craigslist and Facebook Marketplace allow folks to find some pretty great local deals on products they don’t mind purchasing used and in many instances, this can culminate in a win for both the buyer and the seller.

Usually when you’re trying to sell something to a major retailer, they’re going to undercut you on the price in order for them to make a big enough profit margin to make it “worth their while” to keep it in their shelves and sell it to someone else. And if you’re a buyer perusing the goods at one of these retailers, you might be left wondering whether or not you should buy the “used” version of that item, or just spring a little extra for a brand spanking new one. (Anyone who’s shopped at Game Stop already knows the deal.)

If there is one caveat in dealing with services like Facebook Marketplace is that you either come across low-ballers who annoy you to no end or people who straight up try to scam you. Usually, spotting one is pretty easy, but, sometimes even the best of us can get hoodwinked.

TikToker Tarek Ali was shocked that the wool was pulled over his eyes and he was separated from his cash.

He captioned the video with, “I deserve it.”

“I just got scammed for the first time,” he begins the video with a look of incredulity on his face. “I’m not even mad,” he says.

He starts his tale by stating that he has a bunch of camera equipment that he used to create YouTube videos, but a lot of the stuff was just sitting in his apartment so he decided to try and sell it on Facebook marketplace.

He ends up receiving a message from a woman named “Anna” who he calls “Mrs. Con Artist Finest” and proceeds to show a screengrab of their conversation. The image shows she has only one post on IG and 4 followers.

“Anna” proceeds to ask if he still has the Canon Rebel camera kit and if it’s in “perfect” condition. She then asks for additional pictures and videos, and Tarek happily obliges.

The scammer also requests to add the lens to the bundle, which amounts to $770 total, and claims that he should’ve received an email confirmation from Zelle that he received the money. What Tarek didn’t check, however, is whether or not the money cleared in his bank account. Instead, he packaged all of the gear up and shipped it out to Anna.

He asked her to add an extra $37 to the order because he was at the post office and that’s how much it cost to ship the gear.

A few days later, Tarek still hadn’t received the money. This is where the scam gets even more involved. Anna tells him that he should’ve received another email from Zelle indicating that his account is a “personal” one and it needs to be updated to a business one. In order to upgrade, she has to send an extra $400 which he needs to send back to her. She asks him to please send the money back as she needs it for her rent and her daughter’s medication.

If that sounds like it doesn’t make a lick of sense it—it’s because it doesn’t. Tarek tells Anna that he can cancel the Zelle transaction entirely and they can work out another way to get the money. But Anna seemed insistent on using Zelle and this is where Tarek began to sense something was amiss.

He checked his Zelle transactions and didn’t see her name on the list of recipients/people he’s had transactions with. So, he checked the “Zelle Support” email he received, already knowing beforehand that the address was probably going to be a dud/spam one. Sure enough it was: [email protected]

At the end of the video he said that he respected “the artistry” and applauded scammers for “getting crafty.”

He went on to tell Anna to “keep the camera” but added that there’s no way she’s getting the extra five hundred dollars.

Tarek’s case is unfortunately common. The FTC reported that in 2021 alone they received 2.8 million fraud reports, and it’s safe to presume that this number is much higher as only 15% of online scams are ever called in.

In the comments section, Tarek received a ton of criticism for falling prey to the scam, with many pointing out that there were clear signs Anna wasn’t a legitimate buyer. Some pointed out her low number of followers, while others mentioned that he should’ve immediately checked his Zelle account and not the email, and that a standard rule of thumb for avoiding phishing/scamming attempts is to check the actual email address that correspondence is coming from. Especially when it involves money.

“Not she only had 4 followers fam,” one viewer said.

“She greedy like you want the lens kit for free & extra money on top,” another argued.

“Girlll so you must have money money because the first thing I would have done is log into my bank app to see the number go up!!!” a third user said.

“You deserved it bro I’m sorry how are you falling for this in 2022,” another wrote, echoing Tarek’s sentiment toward himself.

Others were happy to list the plethora of red flags about the transaction.

“That profile picture should’ve told you everything,” one user wrote.

“First red flag is anything Wells Fargo,” a second argued.

“First red flag she was guiding YOU through the process,” another viewer added.

A few instructed Tarek that even though he sent out the package, he could’ve “intercepted” it by canceling it at the post office/deliverer he put it in through, especially because he paid for shipping and had the tracking number and receipt.

The Daily Dot has reached out to Tarek for further comment.