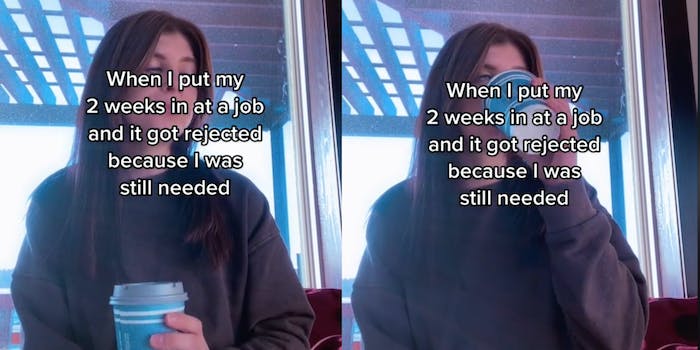 'Last time I checked they can’t keep you in a job when you say you’re going to quit.'

A TikToker claimed in a viral video that her job refused her two weeks’ notice because her service was “still needed” by them.

In the clip, which has amassed over 80,000 views, the user, Courtney Reder (@courtneyyy_lynn), appears slightly confused, drinking in front of a mirror along with on-screen text that reads, “When I put my 2 weeks in at a job and it got rejected because I was still needed.”

In the caption of the TikTok, Reder added, “I now have 3 jobs and [am] still trying to make ends meet.”

In response to her TikTok, a number of users in the comments debated about her situation, with some suggesting how she should handle it. Others questioned whether her employer was even allowed to refuse notice in this way.

“Learn to say no,” one user wrote in a comment with over 200 likes. “You put in your two weeks and can leave. it wasn’t a question a statement.”

Encouraging Reder to stand her ground, several commenters questioned whether the workplace had the right to reject her resignation. In one comment that got over 100 likes, a user wrote, “Last time I checked they can’t keep you in a job when you say you’re going to quit.”

Another commenter added, “Unless you have a contract that says otherwise, once you put in your two weeks you owe your employer nothing else.”

Reder later provided more context in a comment on the video. “I said, ‘Here’s my last day,’ and it was like ‘Nah’,” she explained.

When another user suggested that Reder should have asked for a raise since she’s “in such high demand,” she responded, quipping, “I like the way you think.”

Some users commented that Reder should have left there and then when they rejected the two weeks’ notice, arguing that it wasn’t mandatory. “You did them a favour by telling them beforehand,” one user said.

Others advised Reder to simply stop showing up at the job. “They have no say. They don’t own you,” one user said. Another added, “What are they gonna do [if you stop showing up]? Fire you?”

Ultimately, it looks like the user came to a compromise with their job, saying in a comment on the video that they agreed to keep working there on reduced hours because they liked the job.