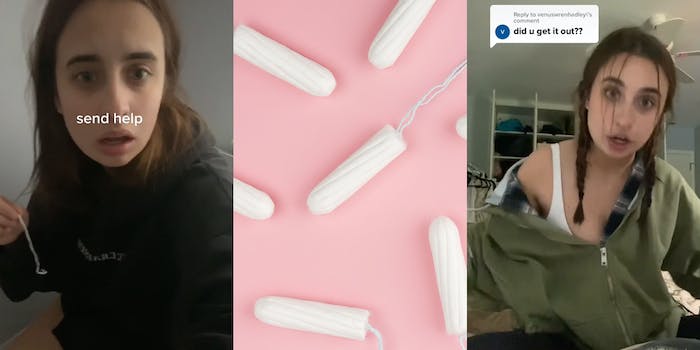 'I refuse to wear tampons for this exact reason.'

A woman on TikTok documented the adventure of losing her tampon inside her body and how she — and her mom — attempted to get it out.

The woman, known as Alex (@agellasf) on TikTok, shared a video showing her holding her tampon string seated on a toilet. The TikToker blinked slowly, looking shocked.

“u will b seeing me at urgent care,” Alex wrote in the video’s caption. As of Sunday, the video has been viewed 6.2 million times.

Several viewers commented that they refuse to wear tampons because they’re scared of the same thing happening to them.

“I refuse to wear tampons for this exact reason,” one viewer commented on the video.

“I’m so scared for this to happen to me,” another viewer commented.

Other viewers said it was time for Alex to “start digging.” Some offered suggestions for how to dig the tampon out.

“Now you gotta go digging for gold,” another user wrote.

One viewer suggested that Alex try sneezing to get the tampon out. Another viewer told her to just “push it out.” Someone else suggested tweezers.

But one viewer seemed to suggest asking for help: “soon you’ll be really close with either a friend, sister or your mom.” Alex confirmed she asked her mom for help retrieving the tampon from inside her body.

In a comment on her video, Alex wrote, “update my mom tried reaching and she couldn’t find it. which one of u r praying on my downfall rn.”

Some commenters couldn’t believe she let her mom try to find the tampon.

“How are you ok with your mom trying to find it. I would rather do anything else,” one viewer said. In response to the comment, Alex wrote, “I’m scarred.”

In a follow-up TikTok video, Alex shared that the tampon got stuck in her cervix, which is why she couldn’t get it out. Whenever she tried to push it out, she was tensing the muscles more, which made it harder for the tampon to come out, she said.

In total, the tampon was stuck in her body for about 22 hours, the TikToker said.

The Daily Dot reached out to Alex via TikTok comment.