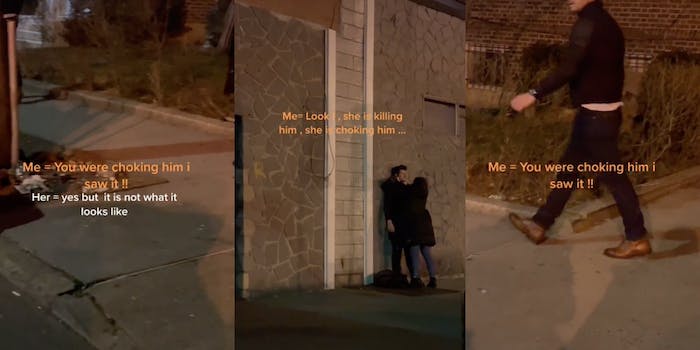 ‘Thank you for helping him’: TikToker lauded for coming to the defense of man getting choked by woman

A TikTok user is being praised online after coming to the aid of a man who was allegedly being choked by his girlfriend.

The footage, filmed by TikTok user @5minwithaurea, appears to show the man being held up against a wall by his neck in New York City.

Noticing the apparent violence taking place, the TikTok user steps out of her car and begins shouting at the couple.

“Hey, what’s going on?” the woman says in Spanish.

The alleged couple, who are also speaking Spanish, begin walking away as soon as they realize they’ve been noticed.

“You were choking him,” @5minwithaurea says, according to captions on the video. “I saw it.”

The woman on the street responds by claiming that the situation is “not what it looks like.”

The man who was being choked also leaped to the defense of the woman, stating that the incident “wasn’t her fault.”

“What?” the TikTok user says in disbelief.

That’s when the man appears to refer to himself as a “psychopath” before claiming that @5minwithaurea will see him on the news.

It remains unclear what the mental state of either person was at the time of the incident.

But other TikTok users clearly saw an abusive relationship and applauded @5minwithaurea for intervening.

“Thank you for defending him,” @twiglegg said. “Not everyone would and it’s not always so easy to get out of situations like that safely.”

Some users also argued that the man’s defense of the woman, despite apparently being harmed by her, represented a textbook example of Stockholm Syndrome.

The video has been viewed nearly 720,000 times since being uploaded.