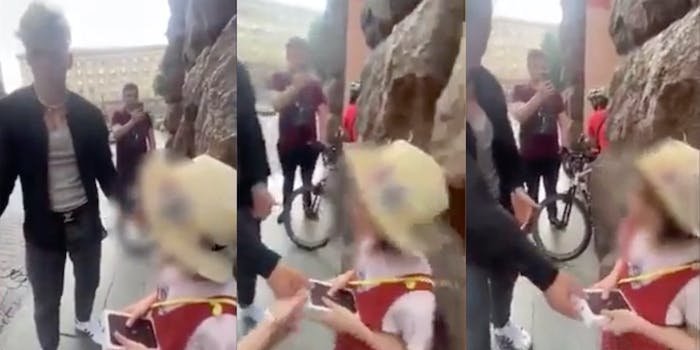 The girl's mother continued to record and caught the interaction that immediately followed the TikToker's 'charitable' stunt.

A Ukrainian TikToker is under fire after he was caught on film gifting a brand new phone to a little girl, only to immediately attempt to take it back.

User @shutoutexe, who goes by Alexander Voloshin on the platform, was filming a charity stunt a la Mr. Beast when his viral moment occurred. Video posted to the TikToker’s account, which appears to have since been deleted, sees Voloshin wandering around a Ukrainian city with a still-packaged smartphone. He stops to talk to several groups before setting his sights on a young girl and her mother.

Voloshin approaches the girl and offers her the phone, to both the child and her mother’s delight. The little girl’s face blossoms into a huge smile when Voloshin offers her the phone and, after glancing at her mother for approval, she reaches over and joyfully takes the phone. She even shares a hug with Voloshin before walking away.

Voloshin’s video ends on this sweet note, but the interaction did not. The girl’s mother continued to record and caught the interaction that immediately followed Voloshin’s “charitable” stunt. Once the cameras—most of them at least—were off, Voloshin approached the little girl again and attempted to retrieve the new phone. Video captured and shared by the mother shows as he tells the girl “it’s just a prop” and even tries to yank it out of her hands.

Her mother interjects, telling Voloshin that he “will make her cry” if he takes the phone back. She tells her daughter not to listen to him and, when Voloshin continues to insist, suggests getting police involved to sort out the issue. The girl’s face is blurred in the video, but her distress is evident as Voloshin repeatedly yanks on the phone, attempting to dislodge it from her grip.

Voloshin and the girl’s mother go back and forth for more than a minute. When she continues to tell her daughter not to surrender the phone, Voloshin—still asserting that the phone is “a prop”—changes his tune. He offers the family 2000 hryvnia (around $73) to get the phone back, but the mother continues to refuse. She notes that Voloshin “gifted her the phone, so it’s hers now,” according to translations.

Voloshin continues to insist that it was simply a prank, an assertion that doesn’t improve the optics of his situation and seems very unlikely given his behavior.

By the end of the clip, Voloshin argument with the mother becomes more heated. He finally reaches down and snatches the phone from the girl’s hands. She has a solid grip on it, requiring Voloshin to actively yank it away from her.

On Reddit’s r/Iamatotalpieceofshit, where the video ended up, commenters were aghast at Voloshin’s behavior. A number of Redditors waited with bated breath for Voloshin’s name or TikTok account to be revealed in hopes of being “part of canceling someone.”

Other commenters noted that “people who fake kindness and ask for the item back after the camera stops rolling are the trashiest people around.”

Several commenters found themselves mired in a discussion over the legality of the video. A number of people pointed out that in many countries, a gift once given is considered the property of the recipient. But the TikToker seems to have plenty of wiggle room, between the potential for the phone to actually be fake, his repeated assertions that it was just “a prank,” and the fact that he immediately requested the gift back.

None of these potential legal loopholes save him from the judgment of the internet, however.