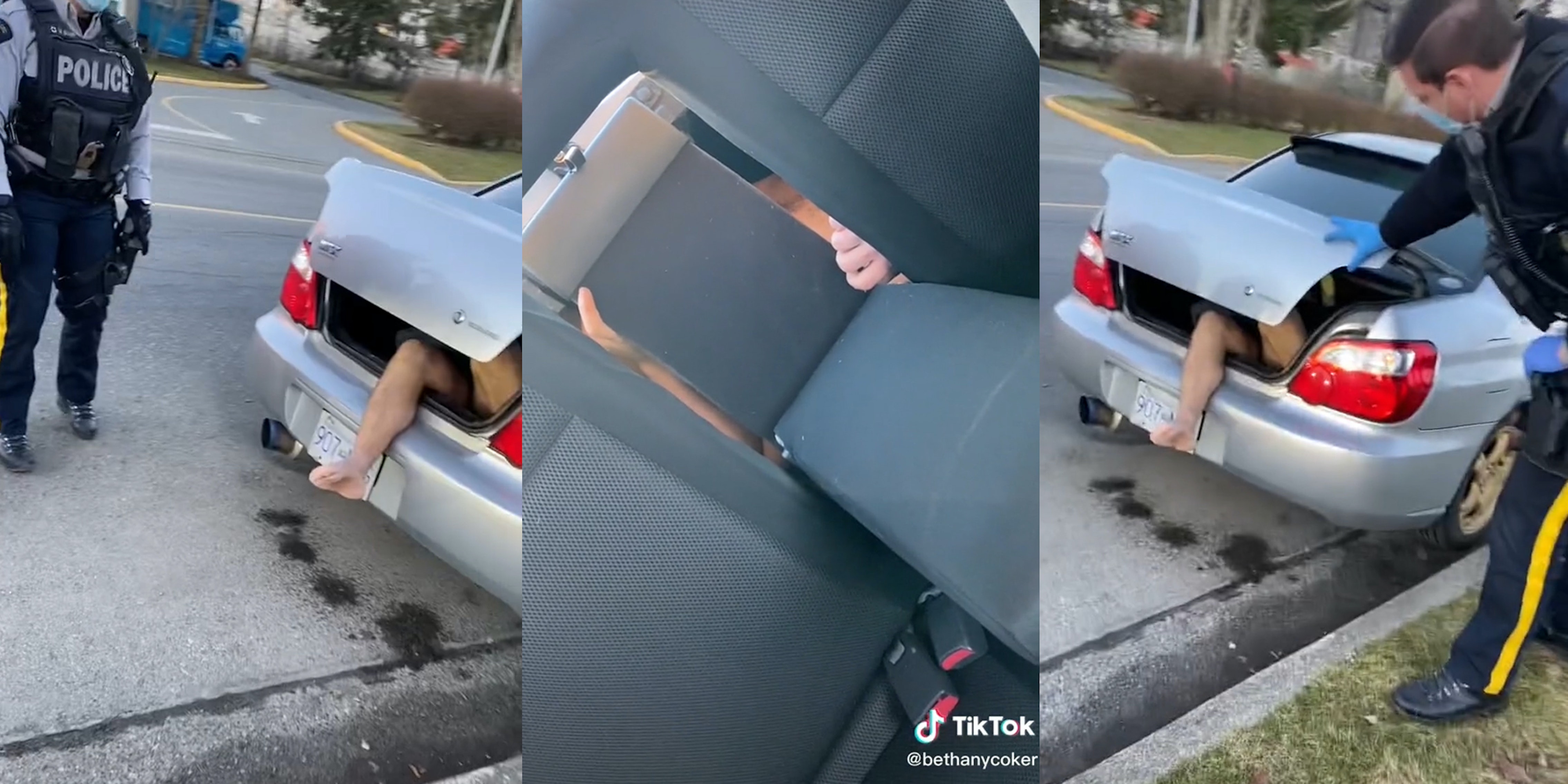 ‘This guy has been in my trunk since SATURDAY fully naked. It’s currently Tuesday’: TikToker finds naked man in her trunk

'This is why my trunk is completely full and my car is a mess.'

A woman on TikTok says a nude man climbed into the trunk of her car and stayed in it for three days. Police were contacted over the incident and have since spoken with the man.

Bethany Coker, a mechanic and TikToker, posted a video that shows her talking to the man on Feb. 2. The man is behind the center console in Coker’s backseat. She asks him why he is in her trunk and if he’s naked. He confirms that he is.

“It’s a right of passage,” he says. When Coker asks how he got in her car, he says he’s “the son of the pope.”

The rest of the viral video, which has been viewed over 9 million times, shows the man’s legs hanging out of Coker’s trunk while police stand watching him. He asks if he can put his pants on, and they say they’d “appreciate” it if he did.

“I’ll tell you, in my whole career, I’ve never come across anything like that,” an officer tells Coker in her TikTok.

A few days earlier, on Jan. 31, Coker posted a TikTok showing mysterious mud stains all over the driver’s seat in her car.

“It looks like someone rolled around in fucking mud and and then got into my car,” she says before cleaning the seat. “The only logical explanation is like a fuckin’ muddy ass homeless man slept in my fuckin’ car last night.”

In Coker’s Feb. 2 video’s caption, she wrote that she thinks that the man in her trunk was the cause of the mud.

“This guy has been in my trunk since SATURDAY fully naked,” she wrote. “It’s currently Tuesday.”

Commenters on Coker’s Jan. 31 video connected the dots that the man was seemingly in her trunk when she filmed the TikTok and cleaned the seats.

“The fact that he was IN THERE while you made this video,” @hayleylynn694 commented.

“You spoke it into existence,” @sam.grimm2 wrote.

“He hears you,” @logan_ronin wrote.

“I can’t believe you cleaned it with him in there and called him out AND HE SAID NOTHING,” @xosakuraoasisxo commented.

Other commenters on Coker’s viral video commended her for how she handled the situation.

“How were you just so chill about it,” @itsshannonburns asked.

“I love how you’re talking to him like when people find a cat in their vent that’s not theirs,” @xxbaileybearxx commented.

“Literally so calm, @spiffyvon wrote. “I would’ve been down the street sooo fast.”

The Daily Dot has reached out to Coker via Instagram direct message. It’s unclear which police department responded to the incident.