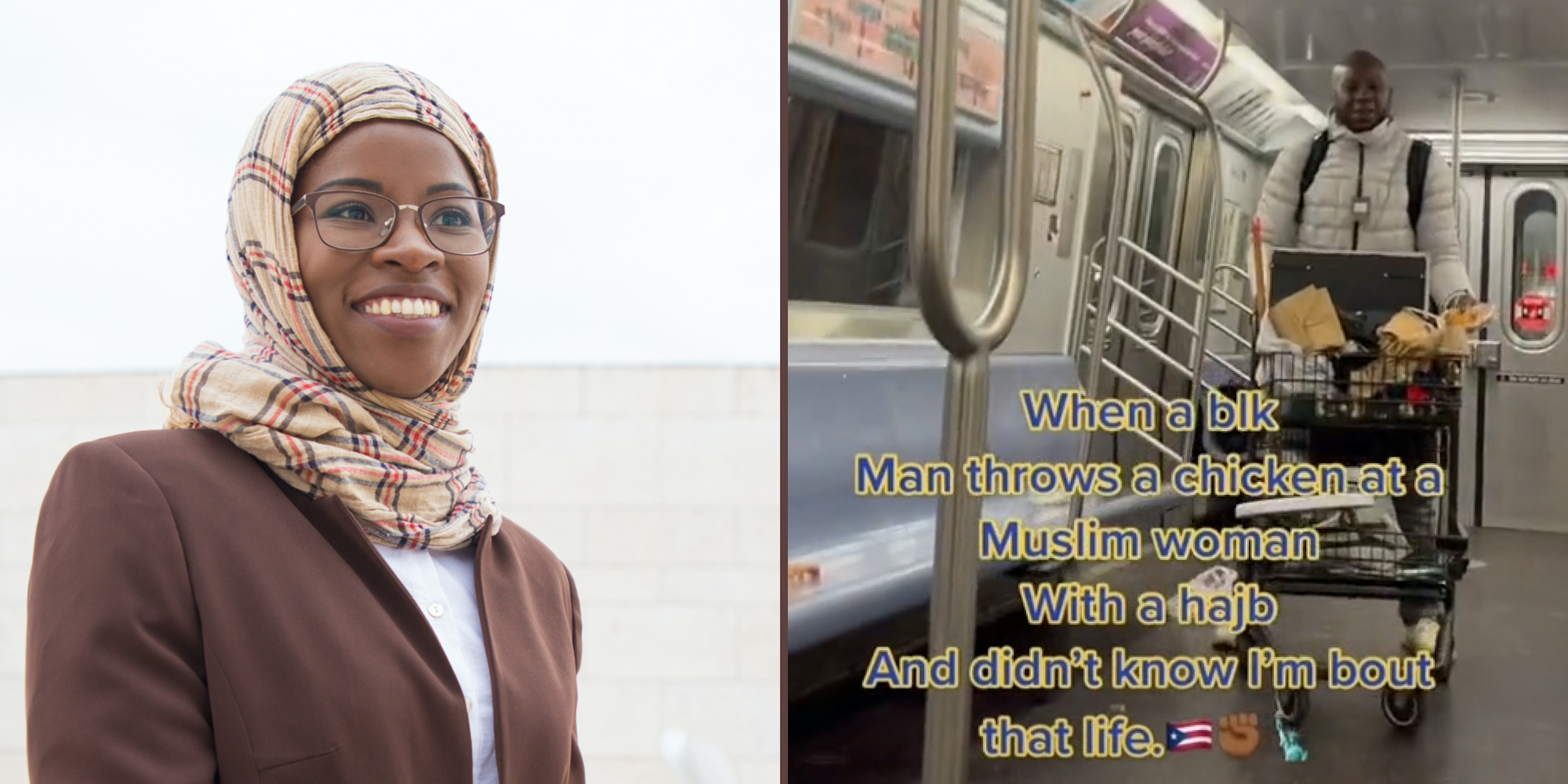 ‘Standing up for our sisters’: Black woman protects Muslim women from man who threw chicken at them on subway in viral TikTok

'I'm proud and scared for you at the same time.'

A TikTok video depicting a Black woman on the New York City subway defending a Hijabi from harassment went viral this past week.

The three-minute video was posted on March 17 by TikToker Shamaine Lady Brookl, @shamaineholman1, and has amassed over 400,000 likes and 2.1 million views.

The video showcases a Brooklyn-bound J train with a few people in it, the camera focused on a man who the poster alleges was harassing a woman on the train. The video features a text overlay that says “when a [Black] man throws a chicken at a Muslim woman with a [hijab] and didn’t know I’m bout that life.”

The video opens with a woman’s voice, reprimanding the alleged harasser. She remains off camera as she says, “I didn’t want to fucking get mad. Who fucking does that. Fucking clown.”

She continues, “I’m sorry y’all he did that because that was some dumb-ass shit. You didn’t even have to do that out there.”

She comes back, saying “You shut the fuck up, and I’m a whole fucking female you dumb ass.”

She replies, “You shut the fuck up, cuz you shouldn’t have done thrown that at them, you stupid ass. They wasn’t even doing nothing to you. Why would you throw something at them with your dumb ass? I wish I was a n***a, so I could punch you in your fucking face, but I’m a fucking female.”

She continues, “I swear to God, you ain’t even had to fucking do that. Those were women. Fucking disrespectful moron. I swear to God.”

He then threatens to punch her.

She retorts: “You’re not going to punch me, shit. You shoulda never been doing that shit to them. Them females did not do nothing to you. You disrespectful, period. Sit your dumb ass down.”

He sits down, and starts to eat a meal as he attempts to respond. Before he has the chance, she interrupts him.

“You ain’t gonna do shit, so sit your ass down, shut the fuck up, period. I’m not with you on that dumb shit. What the fuck you mean? Fuck outta here. With your bum ass, you shut your fucking mouth. You the one disrespecting women, for what? For what? They didn’t do nothing to you, what did they do, sit down? And what did you do? Throw a fucking chicken at them. Why? For what? Fucking idiot. Shut the fuck up.”

He then tries to tell her to shut her mouth, to which she replies, “I don’t gotta do shit. Why don’t you make me shut my mouth. Since you bold, why don’t you get the fuck up and make me? I want you to hit a Black woman, cause you can do that to them, but you damn sure ain’t gonna hit me, fuck outta here. Don’t be doing that shit, you dumb ass. Just shut up stupid, shit all the way the fuck up.”

Shamaine then turns to the women he was harassing, and asks them if they’re alright, and the women thank her. At the same time, the alleged harasser continues to threaten to punch her in the mouth.

He quiets down, and she continues, saying, “You just mad because somebody told your dumbass about yourself. You’ll be alright. Next time, have some fucking manners. Grow the fuck up, you’re a grown-ass man acting like a little-ass boy for what. For what reason?”

This incident occurred during a wave of violence against women of color in New York, well exemplified by the death of Michelle Go, a young woman who was pushed on to the subway tracks, and the death of Christina Yuna Lee, who was followed into her home and murdered.

Shamaine’s behavior was commended in her comments section. One commenter said “I’m proud and scared for you at the same time.” One of the most popular comments, with 21,000 likes, conveys a really sweet message. “Thank u for speaking up for my sisters in Islam, Alhamdulillah Masha’Allah. Usually folks will just watch people mistreat us and do nothing. Thank u.”

At this time, the alleged harasser has yet to be identified. The Daily Dot has reached out to Shamaine via TikTok comment.