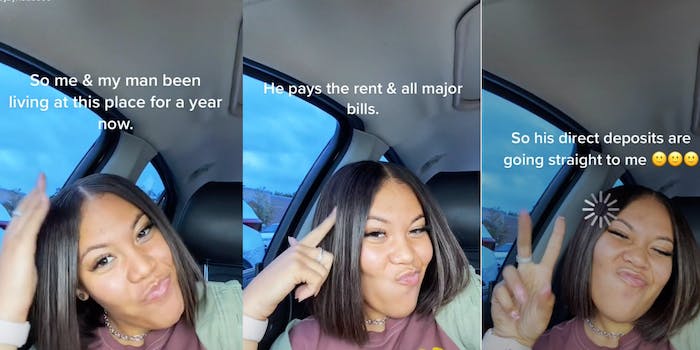 A TikToker recently shared that she and her boyfriend have been living in an apartment together for a year. He takes care of the rent and major finances, the user, @jaynedoee0, shared.

But there’s one problem: The TikToker claims she’s the landlord of the building they’re living in. So all of the money that her boyfriend spends on rent and utilities goes straight to her pocket.

“Do y’all think he’ll be mad once he finds out?” she captioned the video.

Of course, her question divided viewers. While some people thought there was nothing wrong with the dynamic between the couple, others accused the TikToker of using her boyfriend for his money.

“It’s an investment and security for you if the relationship ends,” one person said. “You’re being compensated for your time and effort, sis.”

“Deceitful, maybe,” said another. “But off top he has to pay rent anyway so low key it’s a fair trade.”

“Sis you cracked the code we didn’t know we needed,” wrote a third commenter. “Bow down to you.”

Others, however, were not as amused by the set-up.

“Nothing like building a relationship on lies,” said another.

“That’s why I don’t cohabitate with any woman that [doesn’t] share my last name,” someone else wrote.

At press time, the video had been viewed over 1.2 million times.

The Daily Dot has reached out to the TikToker.