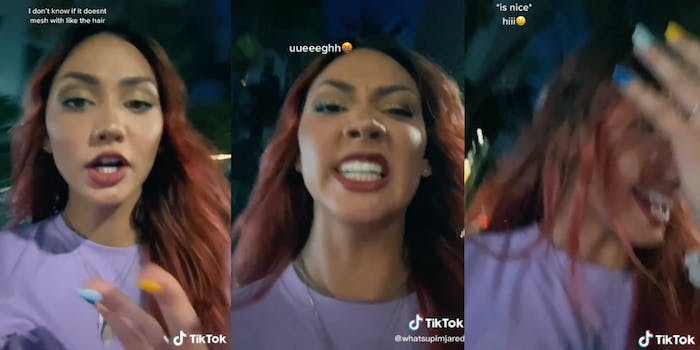 'How to properly deal with men.'

A TikToker is going viral for the way she handled men catcalling her while she was filming a video.

TikToker Lauren Bachman, @whatsupimjared, was walking near the beach filming a video about her outfit when a few men started harassing her on the street. Bachman politely responded “hi,” but when the men continued to talk at her, she started barking at them.

Viewers loved how Bachman handled the situation and supported her in the comments.

“That was a great response,” another said. “I will be using that.”

Others said they sympathized with her as a woman getting harassed in the street.

“Like just whyyy,” one user asked. “That makes me so uncomfy just let a girl walk in peace.”

Bachman later posted another video of men harassing her on the sidewalk. She said a car full of men pulled up next to her while she was walking and tried to intimidate her.

Bachman’s response this time was to proclaim she wasn’t scared of them and would “kill” them if they tried anything.

Though most were supportive, some users apparently tried to shame Bachman for her outfit. One user said the way Bachman acted and dressed made her “attention-seeking.”

“I don’t care if you think I’m ‘attention seeking’ for wearing a crop top and shorts at the beach. … That does not give anyone the right to make me uncomfortable in that way,” Bachman said. “Why are you victim-blaming me? Why are you allowing the cycle to continue and telling those men that what they’re doing is not wrong?”

Another user asked why she bothered saying “hi” to the men if she wasn’t interested. Bachman said men typically start threatening or intimidating her after she ignores them, and sometimes saying “hi” and continuing walking is preferable.

“You saw in my video that after I ignored them, then they threatened me,” Bachman said. “I try to do something to not be threatened. … I say ‘hi’ back, and I keep walking. … This was not an invitation to talk to me.”

Viewers continued to show their support for Bachman in the comments of those videos.

“You do not need to explain yourself. You deserve to feel safe. So sorry,” one user said.