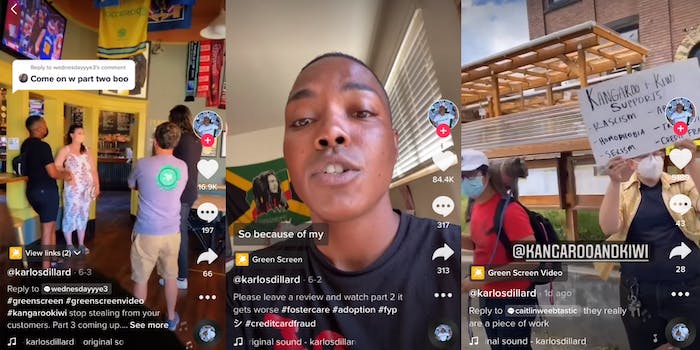 ‘Where are the receipts?’: TikToker accuses pub of fraudulent charges, resulting in investigation, protests

'Just because something is open for 20 years doesn’t mean they’ve been doing good business for 20 years.'

Over a series of videos, a popular TikToker, author, and lived-experience foster care adviser has laid out his side of a dispute over allegedly fraudulent bank account charges stemming from Seattle pub Kangaroo & Kiwi.

The local resident Karlos Dillard first posted about the incidents on June 2, and has since published a total of seven videos with over 208,000 views.

Dillard’s first TikTok in the series got a lot of attention after he explained that, after receiving poor service at the restaurant, his bank alerted him about a large tip (43 percent or $6.33) left on his $14.33 bill at Kangaroo & Kiwi. Dillard, however, says he only left a cash tip and that it was significantly smaller ($2).

Dillard was dining with a friend at the establishment, who also recognized an inaccurate bank statement from the pub. She alleges that she was charged twice, once for her correct meal charge and another mystery charge for $20.33. On the statement shown in the TikTok, the merchant for both charges is listed as Kangaroo & Kiwi, but the merchant ID numbers do not match.

After commenting on the pub’s Instagram account about the charges in question, the two then went to the restaurant to ask for their receipts. In the video, the apparent owner Bradley Howe states that he threw the receipts away.

“He threw away a receipt that was less than four days old,” Dillard says in a video on his TikTok account @karlosdillard.

The pub’s Instagram is now private, but the video shows comments posted by the establishment on the social media platform addressing the situation, mainly apologizing for the poor service and being understaffed due to COVID-19.

“It was our mistake & we are trying to get our staffing shortage handled,” @kangarooandkiwi wrote.

Dillard then got an additional alert from his bank regarding a $27 charge at the establishment at 3:10 p.m. on the day they were dining there. A timestamped video from that date shows Dillard in his home at 3:09 p.m. The original charge from the time Dillard was dining was marked at 1:28 p.m. He claims the later charge is fraudulent and impossible.

In other Instagram comments, the business claims they tried to reach out to Dillard to resolve the issue but were unsuccessful.

“They haven’t made an announcement on their public platform or their website alerting their other customers to make sure they weren’t also fraudulently stolen from,” Dillard says in a video.

“All my money has been returned but it’s really about the principle,” he continues.

Dillard responded to user @hemlock2000 saying: “Imagine trying this hard to cancel a 20 year old business for making a $6 mistake.”

Dillard then shows the receipts and the alleged discrepancies which total over $40.

“Just because something is open for 20 years doesn’t mean they’ve been doing good business for 20 years,” he says. “Also, there wasn’t TikTok, Instagram, Yelp, and Google 20 years ago. Welcome to the modern age. They’re copying card numbers with a card reader—period. The police are involved and so is the news. They had a chance to come clean.”

An update video posted yesterday shows protesters gathered outside the establishment holding signs and urging potential patrons not to enter the pub.

“Y’all really have a whole community out here over $6 and you all can’t apologize?” Dillard asks an apparent security guard sitting outside.

Dillard told the Daily Dot he plans on posting a final update video discussing the success of the protest and where things stand.

“We had people drive all the way from Portland [Maine] to protest because they saw us on TikTok,” he said.

He also said the owner never came to the protests and he hasn’t seen him since they went to the restaurant in person to ask for their receipts. He has, however, received a cease and desist letter from the owner’s attorney Daniel Foe—of Mullavey, Prout, Grenley & Foe, LLP—via email.

Dillard confirmed that the police are involved and that they are investigating credit card fraud, but that he was told it would take at least 6-12 months to even start the investigation because of how busy the department is.

The establishment has 925 Google reviews, and most of the recent ones are 1-star ratings, some seemingly in solidarity with Dillard and his friend, leaving the pub with an overall 3.8/5.

“They stole a big amount of money from my friend who didnt [sic] even get his food, then they charged extra tip in the back without asking and without signing,” wrote user Wilma Banansson who left one star.

The Daily Dot has reached out to the Seattle Police Department, the owners of the establishment, and its alleged attorney.