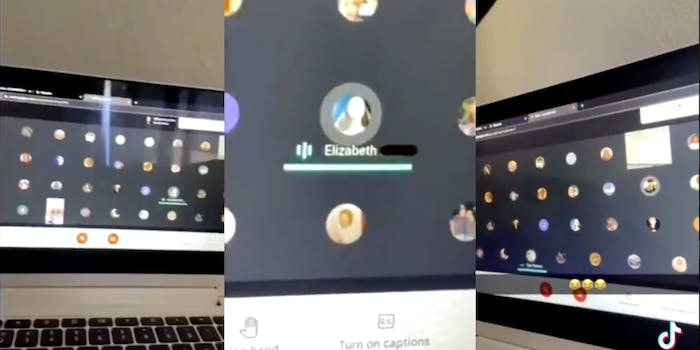 The TikTok video prompted some Zoom users to express concern over their privacy.

A woman named Elizabeth is TikTok famous after forgetting to mute her Zoom mic while she’s presumably having sex.

In the roughly 40-second clip posted to TikTok, a student named Elizabeth’s icon lights up as X-rated noises come through her device. Her moans are broadcasted to the entire classroom.

Some colleagues ask whether she’s all right; others write messages to the group chat reading, “bro mute.”

Elizabeth—who has not been found on TikTok or Twitter—doesn’t reply to the messages, meaning it’s likely she had no idea she wasn’t muted. In just one day, the TikTok video received around 2.6 million views, according to HITC.

“Wtf did I just find on TikTok bruh,” one Twitter user commented after watching the video. “Elizabeth you tripping. Why on zoom thooo.”

“Elizabeth from tiktok is the reason why i have to triple check if i’m mute on zoom,” another said.

The video also prompted some Zoom users to express concern over their privacy, including questioning whether teachers can still hear you if you’re muted. According to the video recording app, hosts or co-hosts of a meeting can mute or unmute a group but only with pre-approved permission. “All participants can also mute or unmute themselves, unless the host has prevented them from unmuting,” its website states.