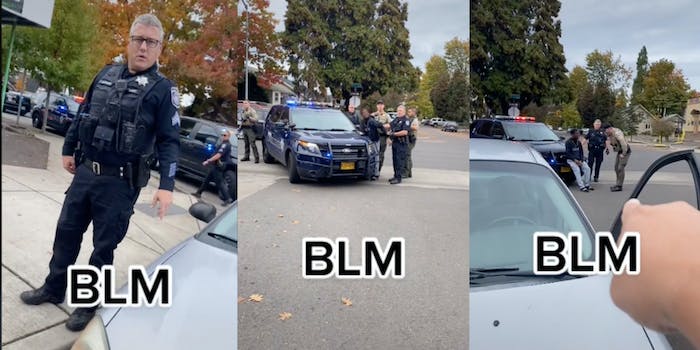 ‘I saw that’: TikToker confronts cops after they allegedly detain Black man instead of white man

The TikToker said an officer called her 'obnoxious and distracting.'

A viral TikTok shows an Indigenous woman confronting police officers as they appear to detain a Black man.

The woman, @kaanaawildrose on TikTok, filmed the Black man being pinned to his car by several police officers. It wasn’t immediately clear where the incident took place.

“It was those people going after him,” the TikToker shouts. “I saw that.”

“That’s what I’m saying,” the man says to the officers and @kaanaawildrose.

The TikToker and the Black man being detained said it was, in fact, a white man who allegedly accosted the Black man. However, the police appeared to believe the white man’s account of the story.

In the video, which acquired more than 4 million views in one day, a police officer is heard in the background telling the TikToker that she’s not “contribut[ing] positively.”

In a follow-up video @kaanaawildrose, an Indigenous woman, notes that the police did not listen to her but her white partner who was with her. The TikToker recalled being labeled “obnoxious and distracting” by an officer.

@kaanaawildrose says in another video that one of the police officers “claimed that he was offended [by her actions] because his wife is Black so he can’t be racist.”

The situation eventually de-escalated, and the man was able to leave safely, apparently due to the intervention of the TikToker’s partner.

“This man was able to go home to his brand new baby yesterday and that man was scared he wouldn’t,” @kaanaawildrose says in a video.

The Daily Dot has reached out to @kaanaawildrose for comment via TikTok.