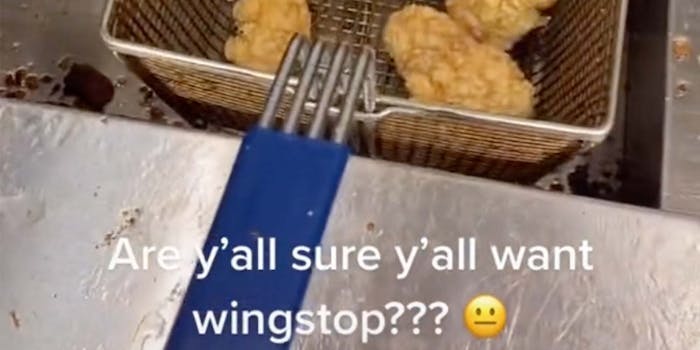 ‘This sh*t is nasty as f*ck’: Wingstop manager says employees get yelled at for wearing gloves

Commenters pushed back on the accusations.

In a TikTok posted on Tuesday, user @huevosyketchup identifies herself as an assistant manager at Wingstop and says that employees are not allowed to wear gloves when handling the food. She also accuses the franchise of other unsanitary practices.

“Are y’all sure y’all want wingstop?” reads the overlay text on the TikTok.

“They said just pick that shit up and use it again,” said @huevosyketchup. She also shows that in the Wingstop location where she works, the trash is placed nearby the dishwashing station.

“Y’all think I give a fuck enough about this job to not expose that shit? This shit is nasty as fuck,” the TikToker continues.

Commenters on the video weren’t so quick to side with @huevosyketchup, though.

“I’ve always seen people with gloves on at the wing stop I go to,” wrote @flyest.

“It all depends on management and where [you’re] located,” wrote @ramboesmi7, who identifies themselves as a former Wingstop employee.

In response to a comment suggesting that @huevosyketchup contact human resources or her manager, the TikToker said she quit her job at Wingstop.

The Daily Dot has reached out to @huevosyketchup via TikTok comment and Wingstop via email.